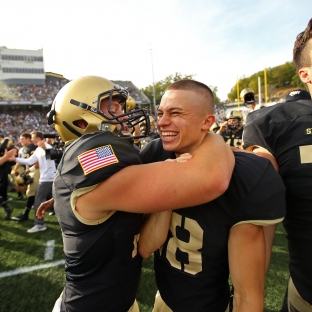 With fewer than 100 seconds left to play in Saturday’s Temple vs. Army matchup, Temple’s Ryquell Armstead put the Owls up 28-21. At the time, it seemed like it would be the decisive score.

Instead, incredibly, Army emerged from the game victorious, thanks in large part to this dramatic 16-yard touchdown pass to Kelvin Hopkins Jr. with one — one — second remaining in regulation.

We’re not done yet! #GoArmy pic.twitter.com/kJMEHHAiI2

The touchdown capped off a drive that moved 79 yards in 90 seconds, including three separate conversions of 3rd & 10 or more yards by the Black Knights. There were plenty of chances for Temple to hold Army’s comeback at bay, but the Black Knights refused to stop until the game was tied and headed to overtime.

In the extra period, Army received the ball first and Blake Wilson drilled a 29-yard field goal, before Temple took the ball over with one chance to right the ship. Instead, Army’s defense hunkered down and forced an Owls field goal attempt, which flew wide, giving Army the win.

With another victory in tow, Army moves to 6-2 on the season, including a perfect 5-0 at home. The Black Knights are bowl eligible for a second straight season, the first time that’s been true since 1984 and 1985.

After the victory, Army officially accepted a bid to this year’s Armed Forces Bowl on Dec. 23 in Fort Worth, Texas.

They’re in! @ArmyWP_Football has officially accepted a bid to this years #LMAFB. More at https://t.co/hkevyWgnb6 pic.twitter.com/sERnhrm0SU

After two tough seasons to begin his time at West Point, coach Jeff Monken is 14-7 in his last 21 games at Army, and things are looking up.