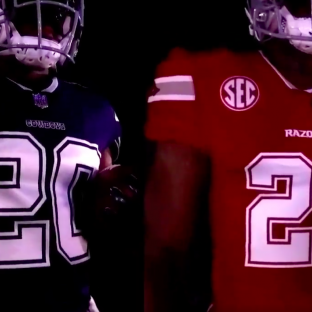 No, those aren’t the Dallas Cowboys wearing red uniforms while playing against Texas A&M. Those are the Arkansas Razorbacks wearing replica Cowboys uniforms for their Week 4 game against the Aggies this Saturday at AT&T Stadium in Arlington, Texas.

Arkansas announced Sunday that its football team will wear the replica unis in a tribute to Cowboys owner Jerry Jones, who was a member of the Razorbacks’ 1964 national championship team that shared the title with Alabama and Notre Dame.

Take a look at the uniform below.

In the house he built. pic.twitter.com/p1UAu1Hqm9

Arkansas also released an emotional video of Jones talking about what it meant to put on a football helmet for the Razorbacks.