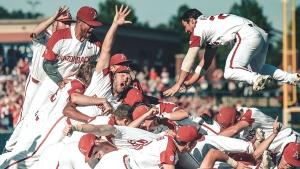 
Heston Kjerstad and Arkansas once again have one of the nation’s premier lineups as they aim for the program’s first national title in 2020 and enter the season ranked No. 7 in D1Baseball.com’s preseason top 25.

Below are a few facts to consider when breaking down the 2020 Arkansas club:

ARKANSAS FALL REPORT: How the Razorbacks are preparing for the 2020 season

In this preview of Arkansas’ 2020 season, we’ve graded the Razorbacks in each characteristic of the game: Hitting, power, speed, defense, starting pitching, bullpen and experience/intangibles. But before we begin, let’s present our projected lineup for Arkansas in 2020.

It will be much of the same for the Hogs from an offensive standpoint.

Arkansas had one of the nation’s most feared offensive lineups last season and that won’t change this spring.

Heston Kjerstad is the ringleader of the offense with a balance of an impressive offensive approach and premier power, while Matt Goodheart is healthy and ready to roll after getting hurt at the end of last season. Some forget that Goodheart actually led the Hogs in batting average last season at .345. He’s an exciting player who should have a strong 2020 campaign.

2020 IS COMING: Our preseason top 25 | Eight for Omaha, predicted | 7 questions to be answered

Christian Franklin did some good things as a freshman last season and has impressive raw power. I look for him to make a huge jump after hitting .274 with six home runs and 34 RBIs last season. Jacob Nesbit (.255) and especially Casey Opitz (.243) also will make huge jumps. Opitz had a huge fall and wowed scouts both offensively and defensively. In addition to likely hitting for a much higher average, also look for Opitz’s power production to surge. Last season, he hit just three doubles and three home runs. No chance he emulates those numbers this spring.

From a newcomer standpoint, Arizona State transfer Cole Austin surprised the Hogs during the fall. He was a strong defender, but also showed he can be an asset as a gap hitter in this lineup. Meanwhile, junior college transfer Braydon Webb has great bat speed and incoming freshman Robert Moore has a mature plate approach and is a line drive hitter. His greatest asset, as of now, might be his defense.

It should be another exciting offensive year for the Hogs.

This should be a powerful offensive lineup.

Sure, the Hogs are without three guys who finished last season with double digit home run totals. But the power production shouldn’t drop off much at all.

Martin and Kjerstad return after hitting double digit home runs last season. And with Martin’s improved plate approach, that power number might increase even more. Goodheart has some power and will certainly hit more than five homers, while the guy to watch is Opitz. Opitz has become a well-rounded hitter. And though he hit three home runs last season, we’d be shocked if he doesn’t hit well north of that number this spring.

Nesbit and Franklin have some pop as well, especially Franklin, who has impressive raw power, while a newcomer like Webb has enough power to run the ball out of the yard. He certainly has the power to go gap-to-gap.

It will be much of the same for the Razorbacks. The power production will be there.

The Hogs have more than enough speed to make things happen on the bases. Casey Martin and Christian Franklin both return after swiping double digit stolen bases last season. Both have a chance to best their marks of 10 and 12, respectively, last season.

Arkansas won’t blow teams away with its team speed, but there are enough speedsters on this roster to keep some teams honest.

Good to be back. pic.twitter.com/rxDDYqblfC

Being a great defensive team starts with having a big-time catcher, and the Hogs certainly have that with junior Casey Opitz leading the way. Opitz showed noticeable improvements with the bat during the fall, while his defensive skills remained elite. He’s an excellent catch and throw guy and a terrific all-around player and leader. He anchors the defensive unit.

Going across the infield, the Hogs love the way they will set up this spring. At third, Arizona State transfer Austin showed great instincts and defensive skills during fall workouts, Martin is an electric overall player and needs to be more consistent at shortstop, incoming freshman Robert Moore is a premier defender and Nesbit is an experienced guy over at first base.

The outfield is also very talented with some athleticism. Kjerstad has gotten a bit more pep in his step and has improved as a defender, Christian Franklin looks to take the reins from Dom Fletcher out in center with ease and Braydon Webb is a quick twitch athlete who excites the coaching staff.

All is well from a defensive standpoint.

The weekend rotation still isn’t set, but the Hogs at least know who likely will have the top two starting jobs on the weekend — right-hander Connor Noland and left-hander Patrick Wicklander.

Noland did some good things last season but had his ups and downs like any young arm in the Southeastern Conference. He showed improvements during the fall, sitting more 90-93 mph with his fastball, along with good secondary stuff. That’s a few mph velocity jump from last season. Meanwhile, Wicklander was anywhere from 89-91 and up to 92 mph with his fastball, along with solid secondary stuff.

As for the No. 3 starting job, it’s up in the air at the moment, though Kole Ramage and senior Kevin Kopps are legitimate options. Kopps will sit in the low 90s with his fastball with good stuff, while Ramage is a seasoned and proven arm. The Hogs also are excited about freshman right-hander Peyton Pallette, who showed electric stuff during fall workouts.

The good news? The Hogs have plenty of talented options for the No. 3 spot. The bad news? There’s no one set in stone at the moment.

The Razorbacks certainly have some good ones to replace with the departures of left-hander Matt Cronin and right-hander Jacob Kostyshock, among others. But this bullpen is still rich with talent and primed to have a solid 2020 campaign.

Veteran right-hander Zebulon Vermillion is slated to lead the bullpen. Vermillion took a big step forward two summers ago and logged more innings last season. Now, he’s ready for the limelight after getting up to 95-96 mph with his fastball and with an improved changeup during fall workouts. Elijah Trest has a big-time arm and was up to 96-97 mph with his fastball, along with a solid slider in the fall, while an X-factor type could be right-hander Jacob Burton. Burton got hit in the fall, but his upside is undeniable with a fastball ranging 95-98 mph. He just needs to be better and more consistent.

BRINGING THE HEAT: 22 college baseball flamethrowers who topped 96 this fall.

Seasoned right-handers Kole Ramage and Caleb Bolden are worth watching, too. Ramage has pitched in some big-time situations in the past and is a quality arm, while Bolden is working his way back from injury and was up to 90 mph with his fastball in mid-November. Arkansas expects him at full speed come Opening Day.

In terms of freshmen, keep an eye on right-handers Peyton Pallette and Blake Adams. Pallette impressed the coaching staff with a strong fall that included a 93-95 mph fastball with a breaking ball with a spin rate around 3100. Meanwhile, Adams was up to 96 mph with an effective breaking ball. Finally, also watch out for young lefty Caden Monk. The 6-foot-3, 160-pounder, showed a lot of movement on his pitches and should log significant innings with his ability to command the zone.

The Hogs have some holes to fill from last year’s team, but they also welcome back several key cogs from that club.

From an offensive standpoint, there’s a lot of experience throughout the lineup with the return of Kjerstad, Opitz, Goodheart and Martin, among others. Franklin is a year older and wiser, and the Hogs have a freshman up the middle in Moore who’s mature beyond his years.

ALL-DECADE TEAM: Which Arkansas star(s) made the SEC’s All-Decade team?

There’s also the Dave Van Horn factor. Van Horn’s teams have been incredibly consistent the past few seasons and we don’t expect that trend to change in 2020.

Arkansas will have another strong season that ends with a Top 16 seed. Then, we’ll see if it can add a national title to its rich history.

All the pieces are there to make another strong run.