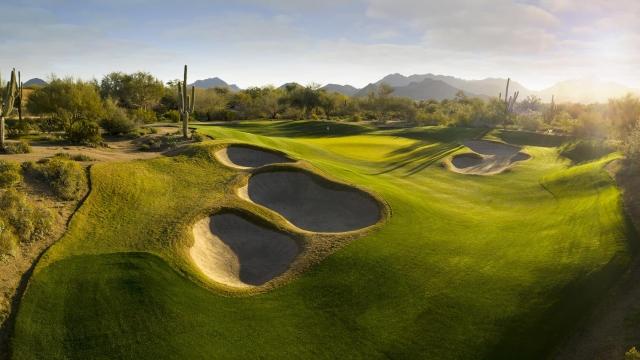 Grayhawk Golf Club, a public golf course located in north Scottsdale, is no stranger to hosting big-time events. The prestigious golf club was built with one thing in mind, to host championship-level events and be available to everyone. They’ve hosted events like the PGA Tour, AJGA and the PGA Junior League. Now they get to host the men’s and women’s NCAA Golf National Championships for the next three years in partnership with Arizona State, starting May 21 with the women’s championship this year.

“We are treating this like a tour event,” Joe Shershenovich, director of Golf Operations for Grayhawk Golf Club said. “We went to Stillwater in 2018 and Arkansas in 2019 to get a feel for what it’s like and they knocked it out of the park. We have our work cut out for us.”

Shershenovich said being able to see what it takes to host an event like this really set the bar for them but left them with no doubt they could do it. Shershenovich said he has always enjoyed watching college golf on television.

“The scope of an event like this where you have live TV is like getting ready for a tour event,” Shershenovich said.

Brandt Packer, a producer for the GOLF Channel, said college golf is different from any other competition because of the passion that is always on display.

“Our crew absolutely loves covering college golf. We circle these events on our calendar. But we especially love covering the NCAA Championships,” Packer said.

Packer explained that since they have covered most of the athletes since they were participants in junior competitions, they get a feel of what the athletes are genuinely like.

“It’s such an incredible benefit for us to cover these players early on because for the fortunate ones that turn professional,” Packer said. “We have a leg up on really knowing and understanding their games and personalities.”

This isn’t the first time Packer and the GOLF Channel have worked together with Grayhawk and ASU. Packer also had the opportunity to cover the women’s golf team’s incredible success in 2017.

“I also produced The Frys event at Grayhawk in 09′ when Troy Matteson beat Rickie Fowler and Jamie Lovemark in a playoff,” Packer said. “In regards to ASU, I have produced numerous collegiate golf events covering both the ASU women’s & men’s teams.”

Grayhawk has been a reputable club since its opening, but Shershenovich said partnerships with Arizona State University, Experience Scottsdale and The Thunderbirds show how the local golf community is one of the strongest in the country.

Rachel Sacco, executive director of Experience Scottsdale, said Scottsdale is prepared to help in any way possible and is excited for the opportunities that a prestigious event like this brings to the community.

“This is a huge thing for our brand,” Sacco said. “Golf has always been part of the DNA of Scottsdale, going back to the Camelback Inn that had the first golf course, which was a patch of dirt that was oiled. Everyone, when they think of Scottsdale, they think of golf.”

Scottsdale is home to more than 200 golf courses that operate on a year-round schedule. With such a wide variety of options and beautiful weather in the winter and spring, Scottsdale has become one of the world’s best golf destinations.

“For us to be able to host and celebrate something that is so important to our community is thrilling,” Sacco said.

“You could definitely say they are a part of our DNA,” Shershenovich said.

Another critical partnership that Grayhawk holds in high praise is their relationship with The Thunderbirds, a special events committee with a storied history that dates back to 1937 when the Phoenix Chamber of Commerce expanded its role as a convention and tourism bureau.

Tim Woods, president of the Thunderbirds and 2020 Waste Management Open Tournament Chairman, said this is one of the many events that the Thunderbirds is committed to supporting with volunteer hours and financial assistance.

“Grayhawk is very dear to us,” Woods said. “It’s a special place. We have had several tournaments we have supported there, the Thunderbird International Junior, which we had a 20-year stretch with, and we also had a Pro-Am that was played out there parallel with the Waste Management Phoenix Open.”

Not only have the Thunderbirds worked closely with Grayhawk, but also with ASU. The Thunderbirds also contributed to the creation of the Thunderbird Golf Complex, ASU’s state-of-the-art practice facility for both their men and women golf programs.

“We have supported the Thunderbird and Sun Devil invitational for many years,” Woods said. “Obviously, with Tim Mickelson, who used to be the coach over there, and Phil Mickelson, one of our fan favorites and long-time supporter of the Phoenix Open, and Missy Farr, we are very tied in with ASU Sun Devil golf.”

Woods said the Thunderbirds have committed to help Grayhawk for the next three years, just like Experience Scottsdale.

“At the end of the day, golf is what we do,” Woods said. “In our minds, when it comes to golf, and there are world-class golf events in Arizona, we want to be involved… We have a very strong relationship with the city of Scottsdale.”

Scottsdale is home to so many fantastic sporting events and helps make the sporting world feel welcomed while in town. With such a strong bond already, Shershenovich has no doubt that it will be a success.