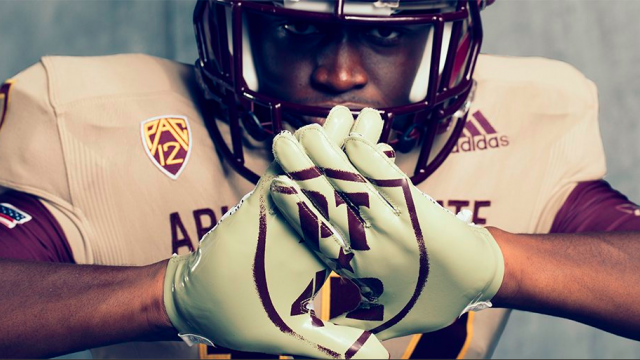 Arizona State faces No. 21 USC at home this weekend in a big one.

Rather than their usual style, the Sun Devils, who are looking to push their record to 5-3 after winning three of their last four, will be wearing these tan-and-crimson “Brotherhood” uniforms when the Trojans come to town:

There are design touches dedicated to Tillman’s memory all over the uniforms, from the “PT” and “42” on the cleats and gloves, for his initials and retired collegiate jersey number. Along the side of the jerseys themselves, the words “Give ‘em hell,” are stitched; they are lyrics from the Arizona State fight song, and words which Tillman repeated to his teammates before beating Nebraska in 1996.

There’s also a lot going on with the helmet, from the subtle camouflage pattern, to the word “Brotherhood” emblazoned on the back, to a list of all Arizona State players and coaches to have served in the U.S. Military:

Arizona State will honor Pat Tillman Nov. 4 vs. Colorado. Back of camouflage helmet lists all ASU player/coach who served in U.S. Military pic.twitter.com/pUorumcqtc

Overall, the uniforms are just a really great-looking package with an even better meaning.