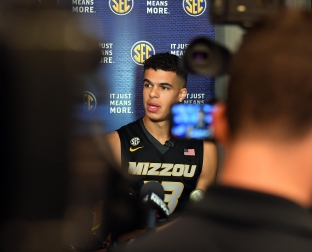 Andy Katz: What's next now that Michael Porter Jr. is done for the year?

1. Missouri’s Michael Porter Jr., is done for the season. College basketball won’t get a chance to see his immense talent this year. And if he leaves as expected for the NBA draft, then the sport will miss out on him completely. But what Mizzou is doing for him is an example of how college athletics isn’t just about playing on the court. Porter’s surgery will be Tuesday in Dallas. The school announced that he would be undergoing a microdiscectomy of the L3 and L4 spinal discs. He is expected to make a full recovery.

MORE: Missouri’s Michael Porter Jr. out for season after back surgery

Medical care is a crucial part of being a college scholarship athlete, even if you never play because of the injury. Former Purdue forward Robbie Hummel went to New York City for his second ACL surgery. The Boilermakers put him up in a hotel for four nights. Purdue took care of him and Hummel is appreciative of their care. Mizzou is doing the same for Porter Jr. “If he was a normal student that’s not happening,” Hummel said Tuesday. “His surgery and rehab is free. The only thing better would be to be in the league and collecting a check at the same time.’’

As Mizzou coach Cuonzo Martin said in a statement, “Our top priority as a program is the well-being of our student-athletes, so Michael beginning this process to be 100 percent healthy is important to all of us. Our focus has been on Michael’s well-being, just like every other player in our locker room.’’ Porter said he appreciated the support of the Mizzou program. His brother, Jontay, is on the team. His father, Michael Porter, Sr., is an assistant on the staff. What happens next will be interesting to say the least. An NBA decision maker told NCAA.com Tuesday that Porter’s records will be evaluated at the NBA draft combine in May. Players sitting out their rookie season isn’t uncommon (see: Ben Simmons, Nerlens Noel, Blake Griffin, Joel Embiid). So, it can happen for Porter, too. Or maybe this gives him a chance to play in college, too, although that would likely be a reach based on his earning potential.

2. St. Bonaventure coach Mark Schmidt told NCAA.com Tuesday that Jaylen Adams is still day to day. Adams hasn’t played this season due to a sprained ankle. He averaged 20.5 and 6.5 assists a game as a junior. He was expected to pair up with fellow senior Matt Mobley in the backcourt and will soon. Mobley is averaging 25 points a game without him in the lineup.

The Bonnies lost to Niagara in the opener but have won the last two. Freshman Thiefu Ngalakulondi has stepped up so far, averaging 11.5 a game. And junior guard Nelson Kaputo is also averaging 11 so far. The Bonnies, picked to finish second to Rhode Island in the Atlantic 10, will get another major test Friday when they face Maryland in the Emerald Coast Classic in Niceville, Florida. “Jay’s injury has allowed the young guys to get needed experience. Hopefully the injury will benefit us later in the year. But it sucks now.’’

3. Gonzaga is off to the PK80 tournament where a possible matchup with Duke could await them by the end of the weekend. If the Zags are to make another deep run in March, a lot will depend on the freshmen.

Siewert was on crutches during Sunday’s Paradise Jam championship victory over Mercer in Lynchburg, Virginia, after injuring his foot in Saturday’s semifinal win over Drake. Siewert is a critical stretch-four shooter off the bench for the Buffaloes.

5. Temple could end up being the surprise team in the American this season after winning the Charleston Classic with wins over Old Dominion, Auburn and Clemson last weekend. So, how are the Owls doing it? Well after discussing them with an objective AAC observer, Temple is proving it has leadership in Josh Brown, depth, talent with Quinton Rose, Brown, Shizz Alston Jr., and Alani Moore II, perimeter shooting, and they can actually outscore teams instead of relying on their defense. Scoring 88 in the Auburn win and then 67 in the Clemson win shows they can produce when pushed.