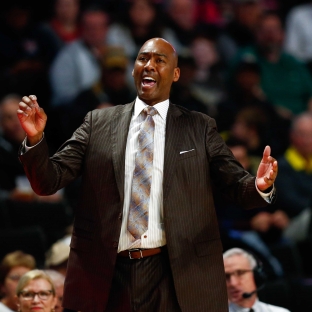 Andy Katz: 5 observations from an intriguing week at the Paradise Jam

LYNCHBURG, Va. — Some thoughts after covering 12 games in three days at the relocated Paradise Jam at Liberty University, due to Hurricanes Irma and Maria.

1. Mercer will be one of the teams no one will want to face in the first round of the NCAA tournament if the Bears can get through the Southern Conference. No one. All five starters are back. And this team has size, shooting and athleticism. Every other coach at the tournament could not stop praising Bob Hoffman and the way in which he runs his team. The Bears were in unison on the bench (something they call echo when the staff calls out a play, the bench repeats it.)

Ria’n Holland, who played at Wichita State behind Ron Baker and Fred VanVleet, is a competent and consistent scorer. He doesn’t shrink down from anything. Jordan Strawberry (yes, Darryl’s son) makes big plays late and never gives up on the possession. Desmond Ringer, if he can stay out of foul trouble, is a load in the post. Stephon Jelks is a slashing, active forward, who makes big shots when the game is on the line. Hoffman loves freshman Marcus Cohen, and it’s easy to see why. Cohen comes off the bench and distributes, defends, and is the right compliment to Holland. Remember, Mercer knocked off Duke in 2014 in the first round. They have the pieces and the chops to do it again.

This team got even closer over the summer, spending 10 days in the Dominican Republic on a service project as well as practicing. Hoffman said they were building wells, working with Samaritan’s Feet International, sleeping under mosquito nets for four nights, and living “real” by helping others. He loves Mercer and it’s mission and that’s why he has stayed. Stay tuned for this squad in March, because they should be relevant.

2. Wake Forest will be fine. I still believe that despite losing to Houston Sunday and leaving the tournament 1-2. If the loss was by itself then no one would think twice, since the Cougars are a legit AAC contender. The problem was the loss to Drake, and the losses to Liberty and Georgia Southern at home the previous week. Wake has oodles of talent, but coach Danny Manning is still trying to figure out whom to play.

I’m not sure there are many teams with two 7-foot centers to rotate and three other bigs at that position to come in off the bench. He’s still trying to figure out who to play. If he can get the rotations down and they can decide who will be the go-to player late (is it Bryant Crawford, Keyshawn Woods, Brandon Childress or Chaundee Brown?) then this team still be a factor. They have dug themselves a hole. That’s not in dispute. But they still have plenty of opportunities ahead to cover up for some of these early-season losses. I can see the potential. The wins just have to come in bunches here soon to realize it can be done.

3. Niko Medved is a star in coaching. He’s as genuine as they come in the profession. He got Furman to become a much better defensive team. He has taken that approach and is pushing the basketball offensively, with the right pieces at Drake, to make the Bulldogs a great watch this season in the Missouri Valley. Drake fans are clamoring for a winner: a good friend of mine is a season-ticket holder and says the fans can’t wait to watch this team. Medved has such a tremendous balance of thought, never too high or too low. He gets it. And the players have really taken to his approach.

He’s got the type of senior guards in Reed Timmer and Graham Woodward who programs love to have at this level for four years. The Bulldogs were genuinely ecstatic that they beat a high-major team in Wake Forest. Woodward’s family said after the game that those of us on the outside have no idea how much these upper classmen have longed for success after putting in the hard work. The coaching staff and administrators had nothing but kind words for former coach Ray Giacoletti, who recruited the upperclassmen. Medved is the right coach to take them to the winner’s circle in the Missouri Valley, which is wide open now without Wichita State.

4. Kelvin Sampson must have incredible patience with Houston. He has to blend a collage of players from traditional incoming freshmen to junior college and four-year transfers. And yet, throughout some rocky moments, he gets them to all buy in. No team in the field was as intimidating as the Cougars when they came out for warmups. They were uniformly dressed in a tight white or black tank, depending on the day. They feed off his intensity.

Rob Gray (@iRob_G) with the DAGGER for @UHCougarMBK. The senior put on a show all weekend. pic.twitter.com/GiIZqJ9J3j

And while the back and forth with Sampson during the game seems spirited, it is always with the right intent. The players appear to really get his message, even if he has to continue to remind them early in the season. And the family affair with this program is something unique. Kellen Sampson is on the bench. Lauren Sampson is the marketing director and was the organizer of the hundreds of thousands of donations that came in for Hurricane Harvey relief (they’re still coming) and Karen Sampson, Kelvin’s wife, is keeping it all together. They’ve been doing this their whole lives from Oklahoma to Indiana through the NBA and now Houston.

5. Baker Dunleavy will win at Quinnipiac. You can tell. He’s got the right staff, especially hiring veteran coach Tom Pecora. Dunleavy has a demeanor reminiscent of Villanova’s Jay Wright. He’s calm, cool, and understands the process. I would be shocked if it doesn’t work out for the Bobcats. I’ve already fallen for McKinley Wright IV at Colorado, or as I’ve dubbed him for his end-to-end speed, the Roadrunner. He’s one of the best point guards in the country. Period.

MBB: Are ticketed for an early-season showdown between Notre Dame and Wichita State?

Houston’s Rob Gray is a scorer, not a shooter. He’s going to put up monster numbers. Drexel’s Tramaine Isabell is as tough a player at his level as you’ll find. He hunts his shot and delivers. If Myo Baxter-Bell can stay on the floor then the Flames will be a factor in the Big South. He’s incredibly tough to defend with a soft touch, quick feet and a base that’s hard to get around.