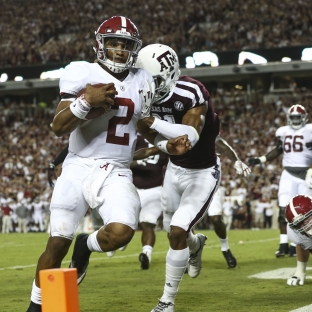 TUSCALOOSA, Ala. — Alabama finally looked mortal with what coach Nick Saban deemed “a pretty ordinary game for us.”

The top-ranked Crimson Tide seemed less inclined to celebrate Saturday night’s 27-19 victory over Texas A&M than to dwell on what went wrong — and, of course, how to fix it. The Aggies came much of the way back from a three-touchdown deficit and afterward Saban contended the media hype was partly to blame for the performance.

College football rankings: Behind the numbers of the AP Top 25 for Week 7 | Full poll

Two days later, he and the Tide were looking at it as a learning experience. Winning the first two Southeastern Conference games by a combined score of 125-3 didn’t provide all that much in the way of teaching opportunities for a coach who’s always looking for ways to get his team’s attention.

The Aggies supplied just that. And the coach pounced on it with the suggestion his team bought into the national praise.

“I think games like that are more important to our team in terms of our future than the big blowout wins because you’re playing in a hostile environment against a great SEC team,” Alabama tailback Damein Harris said Monday. “Things don’t always go your way and you’re faced with a lot of adversity so I think that (presents) lessons to us as to how we fight through that adversity in upcoming weeks.

“We know we have a lot of football to play and something that Coach Saban always says is lasts week’s success doesn’t determine this week’s. That’s where we’re going with it.”

Next up is Arkansas, which will be another heavy underdog when it visits Bryant-Denny Stadium Saturday night.

Perhaps the game was a wakeup call if indeed the Tide actually needed one. Alabama followed a similarly close game and poor finish against Mississippi last season with a series of more comfortable wins. Ditto for a loss to the Rebels two years ago.

RELATED: Hurricanes could use big FSU win as a momentum-builder | Red River rivalry

If Saban’s scowl and fiery message don’t bring his players back to earth, a less than stellar performance can do the trick.

Guard Ross Pierschbacher said Saban’s message after the game was basically “are you going to listen to me or the media?”

Alabama lost its first turnover of the season and allowed 300-plus yards for only the second time. Defensive back Minkah Fitzpatrick made a goal line interception in the fourth quarter to help preserve a safer margin, though the Aggies managed to block a punt for a safety and score a late touchdown.

Texas A&M set up a third quarter TD with a fumble recovery.

“I think we got punched in the nose a little bit, especially when we fumbled the ball and they scored a touchdown and the crowd got into the game and they got the momentum of the game,” Saban said. “I think it’s important that your team learns to respond to that.

“I guess we can debate whether we responded very well to that or not. In my opinion, not as well as we need to. So there’s definitely an opportunity to learn something from that experience, and that’s what we’ll try to take from this.”