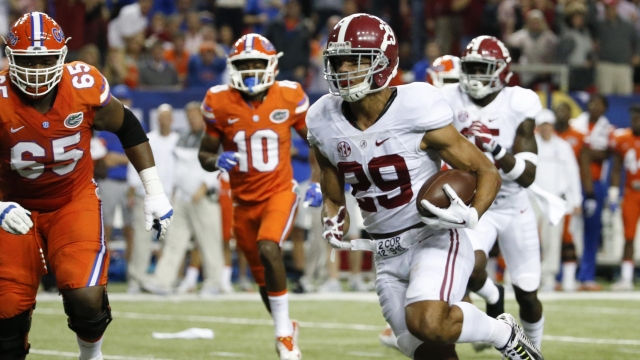 TUSCALOOSA, Ala. — On those scorching hot late summer days when football practice is harder than usual at Alabama, a kid from New Jersey is usually the player least bothered.

If Minkah Fitzpatrick has learned anything in his young life it is that complaining about a difficult situation accomplishes nothing.

The All-America defensive back has been affecting the environment plenty for the top-ranked Crimson Tide since coming to Tuscaloosa three years ago from the central New Jersey town of Old Bridge. Goal-oriented since he was six and matured beyond his years by flooding that left his family homeless as he started high school, Fitzpatrick has mastered Nick Saban’s process. Fitzpatrick sees the game like a coach — like his coach — leads by example and has become maybe the most versatile defensive player to ever play for Saban’s Alabama dynasty.

“We have six different positions in the secondary and he’s played every one of them,” Saban said. “I don’t ever remember having anybody that’s played all the roles he’s played here and done it as well as he’s done it.”

None of Fitzpatrick’s success is particularly surprising to those closest to him. The 6-1, 202-pound junior has been striving for greatness since he was little. Melissa Fitzpatrick, Minkah’s mother, remembers a trip to Disney World for her oldest daughter’s cheerleading competition, and then 6-year-old Minkah telling her that he would be back in Florida someday playing for a national championship with his Pop Warner football team.

A few years later, Fitzpatrick’s team did just that. And when his 10- and 11-year-old teammates were getting rowdy the night before the game, he told his mom he didn’t think that was the appropriate way to prepare.

“And I’m like looking at him and it was kind of like concerning for me,” Melissa said with a little laugh. “Because we are a playful family. He can be playful and silly, but when it comes down to something he puts his mind on, he is so focused. It is crazy.”

To this day, Fitzpatrick has his mother grade his play after every game.

In August 2011, just a few days before Fitzpatrick was to begin his freshman year at St. Peter’s Prep in Jersey City, Irene made landfall in New Jersey as a tropical storm. Record rain in parts of the state overflowed rivers — including the one that runs behind Fitzpatrick’s home. The storm had already passed when the backyard started flooding. The flood collapsed the house and destroyed most of what was in it.

“Everything I had was just gone,” Fitzpatrick said.

Fitzpatrick has returned four interceptions for touchdowns in his college career.

Fitzpatrick, his mother, father, Minkah Sr., and four siblings packed into the basement of Melissa’s parents’ home in Old Bridge for almost a year while their house was being restored. Melissa Fitzpatrick said they reconsidered whether they could still afford to pay tuition at St. Peter’s, and whether it was worth the time and effort for Minkah to attend a school 35 miles away — that’s upward of an hour drive through Jersey traffic — from his hometown. Even when they moved back into the house, there was much work to be done for the parents, Minkah, and his older sister, Destiny.

Minkah Fitzpatrick offered to quit football at one point and get job to be more help to his family.

“I could tell some mornings he was really tired,” said longtime St. Peter’s head coach Rich Hansen, who for four years drove Fitzpatrick to and from school. “And Minkah never complained. He was all about trying to stay focused and trying to stay with it.”

Hansen called Fitzpatrick the “single most driven” player he has ever coached.

St. Peter’s won the state championship in 2014 with a team that also included Notre Dame quarterback Brandon Wimbush and Stanford linebacker Jordan Fox. Hansen said when he called his players the next morning to congratulate them one more time he reached Fitzpatrick in the middle of a workout.

“As soon as we finished the championship, everybody else was taking a break for real,” Fitzpatrick said. “I was like, ‘I ain’t got no time to be doing that. I’m going to Alabama.'”

MORE: How the Power 5 conferences stack up | Guide to making the CFP

At Alabama, Fitzpatrick earned a starting role as a freshman (he had two interception returns for touchdowns) and was thrilled to find out he had a something in common with Saban. Alabama does psychological testing on incoming players to help determine optimal ways to coach each individual. Fitzpatrick said the test showed him to be an analytical thinker, with results that closely matched those of his coach.

“Does he think about football the way I would like a player to think about football? Absolutely, because he’s not a guy who’s trying to memorize what he does,” Saban said. “We like, I like, conceptual learners. Guys that understand the concept of what you’re doing and then they can apply those concepts to things that happen.”

During a conversation with Fitzpatrick, he often says things that sound as if they come straight from Saban’s greatest hits.

Saban: “When you don’t have players like (Minkah Fitzpatrick), it’s a problem in a game like this.”

Fitzpatrick can play either cornerback or safety spot or star, a hybrid position that can have Fitzpatrick covering slot receivers, filling gaps like a linebacker or rushing like a defensive end.

Last season, Fitzpatrick had six interceptions and two more touchdowns. So far this season, Fitzpatrick has yet to cause a turnover, but make no mistake: He is still the most important player on the Tide’s dominant defense, which is coming off a shutout against Vanderbilt and preparing for a Mississippi team that has scored 109 points in the last three games against Alabama.

He is also well on his way to accomplishing another of his goals: first-round NFL draft pick.

Melissa Fitzpatrick admires her son’s commitment to excellence, but reminds him to also enjoy the ride.

“Work hard,” she said, “but try to take a second all the time before he goes out on that field to be thankful because it almost wasn’t the situation.”