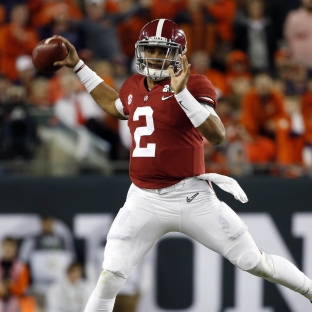 TUSCALOOSA, Ala. — The wounds from Alabama’s national championship game were still fresh when Jalen Hurts mentally closed the book on his mostly terrific freshman season.

There was an unpredictably rapid rise to stardom, a national title that slipped from the grasp of Hurts and the Crimson Tide and, yes, the rookie flaws. The young quarterback had lots of work to do.

And a bright future to look toward.

“I ain’t worried about anything that happened last year,” Hurts said early in fall camp. “I moved on, that book is over, that chapter is over. Now it’s time to write a new one, write chapter two.”

Chapter one was pretty thrilling even if it ended with a huge disappointment. The Crimson Tide lost to Clemson on a last-second touchdown in the national title game, but Alabama is hoping Hurts was just beginning to tap his potential. Last season he uncorked an array of big plays with both his arm and his legs.

Chapter two begins on Sept. 2 when the top-ranked Tide opens against No. 3 Florida State in Atlanta. For all the resilience and talent Hurts flashed last season, late-season passing struggles reminded everyone that while he is talented, he still was a freshman.

Improving his passing skills has been a primary focus for Hurts and new offensive coordinator Brian Daboll throughout the offseason.

Hurts was good enough to be named Southeastern Conference offensive player of the year. He flirted with 3,000 passing yards and 1,000 rushing yards while accounting for 36 touchdowns.

Hurts completed 62.8 percent of his pass attempts last year as a freshman.

Things didn’t click as well late in the season. Hurts totaled 326 passing yards in the SEC championship game and two playoff games against strong defenses that adapted to what he could do well and what he couldn’t at the time.

It led to some criticism even after thriving most of the way as the first true freshman quarterback to start for coach Nick Saban. Hurts found an easy way to ignore most of that.

Tide lineman Ross Pierschbacher, however, said Hurts “has a chip on his shoulder” coming into this season.

“There’s some still some people out there that think he needs to improve or he’s a freshman,” Pierschbacher said. “As a player, we like to see that he’s always wanting to improve and even that he’s had this much success, that he’s not satisfied.”

RELATED: Alabama eager to start season with challenge vs. FSU

Now, the guard said Hurts has better command of the offense, not just his own responsibilities but what each player around him is supposed to do. The quarterback even treated his linemen to dinner recently, appetizers and all.

Last season, Hurts didn’t win the starting job until the second game after an unflappable debut off the bench against Southern California. A first-play fumble didn’t rattle him.

Nor did a potentially game-changing fumble that Mississippi returned for a touchdown and a 24-7 lead two weeks later.

Back-to-back days on a Watch List for @JalenHurts! Today he was named to the Manning Award Watch List given to the nation’s top QB #RollTide pic.twitter.com/MHNQBBjgT2

His response in leading a comeback win scored big points for a player who had already won over his teammates. There was no question then it was his team. First-game starter Blake Barnett transferred less than two weeks later, and Hurts’ two other backups headed elsewhere after the season.

“I saw it happen live but going back and looking at the film and seeing that type of play, that type of hit, the momentum that they had,” Alabama tailback Damien Harris said. “And when he came over to the sideline, he was just like, ‘All right, what’s the next play?’

“I think that moment, at least for me, that was when I was like OK, this kid’s for real. A play like that you would see a lot of kids, especially a true freshman, lay down and just accept the fact that the game was over. He never stopped fighting, and he brought us all the way back.”

Alabama is counting on Hurts having a lot more fight still in him.