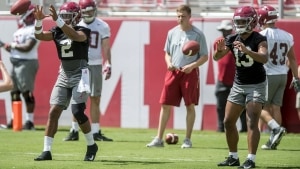 
With the way Alabama’s quarterback situation has captivated the nation, Herbstreit may see some mayhem Saturday when the defending national champions open against Louisville.

Who Nick Saban will start is unknown to the public.

That was the case in 2014 when Blake Sims got the nod over Jake Coker to start the Tide’s opener against West Virginia.

Alabama won, 33-23, in Atlanta. Sims said he found out the day before the game.

RELATED: 6 of the most memorable Michigan vs. Notre Dame football games

“It felt real good,” Sims said back then after the win. “I worked hard and I’m just glad Coach Saban gave me an opportunity.”

Somebody will probably leak it an hour or so before the 7 p.m. kick. That’ll cause Twitter mayhem, but we’ll finally see Saban’s initial on-field quarterback plans.

Herbstreit, who will be calling the game, expects Hurts, who is 26-2 as a starter, and Tagovailoa, the College Football Playoff title game hero, to play Saturday and next week against Arkansas State.

Maybe one emerges going into Week 3’s SEC opener at Mississippi, but Herbstreit believes Saban can’t get caught up trying to keep two players happy over the team.

“That’s a very slippery slope,” Herbstreit said. “Nick Saban is way more in tuned to that than any of us, but at some point, he’s going to recognize that, ‘OK, I’ve got to pull the trigger and this is the guy. And the other guy might get some reps and mop-up duty, but this is the guy that we’re going with.'”

Herbstreit said Saban can’t be concerned about what happens after making that call.

MORE: Here’s who won the most notable quarterback battles around the country

It was Week 2 in 2011 at Penn State when AJ McCarron established himself as the starter after he and Phillip Sims saw action in the opener. This competition could extend into Week 3 because they should shine against Arkansas State.

Then again, one could really light it up Saturday, start next week and remain in that spot the rest of the season.

The question is who?

Just focusing on Saturday, here are my top five scenarios for how the most anticipated Week 1 moment of the college football season will unfold in Orlando, Florida.

1. Hurts starts. Plays solid. Tagovailoa comes in on the fourth series, leads two straight scoring drives and remains in game until the fourth quarter when it’s out of hand.

Mac Jones closes it out.

After the game, Saban says Tagovailoa has looked good all preseason camp, he still has faith in Hurts and they’ll continue to give both an opportunity to win the job.

2. Hurts starts. Plays outstanding. Stays in the game and Tagovailoa replaces him in the fourth quarter with Alabama comfortably ahead.

Saban will once again accuse the media of creating a quarterback “controversy,” but Hurts rose above it and played great.

Game’s close at halftime. Saban turns to Tagovailoa to start the second half. He plays better and Alabama pulls away in fourth quarter.

Saban will say Alabama has two great quarterbacks, and the team will continue to find ways to utilize them next week.

4. Tagovailoa starts. Comes out ripping it. Crowd’s on fire.

Saban sticks with him. Alabama runs a trick play with Hurts and Tagovailoa out there together for big gain. Alabama destroys Louisville. Jones closes game out.

Saban calls win a total team effort, praises Tagovailoa for managing game and says he planned to play Hurts, but didn’t because the offense was in a rhythm with Tagovailoa.

5. Tagovailoa takes the first snap with Hurts flanked to the right and Damien Harris to the left.

Hurts motions wide right. Tagovailoa fakes a pass to him and hands ball to Harris.

Hurts takes the next snap. Plays the entire first quarter.

Tagovailoa opens Alabama’s first possession of the second quarter and plays until halftime. Saban goes with the hot hand to start the second half.

Could go one of those ways or totally different, but Orlando, Florida, won’t be protected from some form of Dean Winters on Saturday night.

This article is written by Duane Rankin from The Montgomery Advertiser and was legally licensed via the Tribune Content Agency through the NewsCred publisher network. Please direct all licensing questions to legal@newscred.com.