After two top-five wins, Arizona State is this week's Team of the Week in women's hoops

Over an improbable 36-hour period, the Arizona State Sun Devils did something that no unranked team has ever done — beat two top-five teams in consecutive games.  Arizona State staged a late comeback to defeat No. 2 Oregon on Friday and then on Sunday rode its suffocating defense in a win over third-ranked Oregon State.

RANKINGS: South Carolina is the new AP No. 1 | Gamecocks are Michelle Smith’s top team, too

It’s the first time a team has beaten two Associated Press top-five teams in back-to-back games during the regular season since 2010, when Stanford topped No. 4 Xavier and No. 1 UConn.  Arizona State (13-4, 3-2 Pac-12) came into this week’s action receiving votes in both of the major polls however has not been ranked since the second week of the season.

Arizona State’s come-from-behind 72-66 win over Oregon on Friday night was fueled by the Sun Devils outscoring the Ducks 30-14 in the fourth quarter.  Robbi Ryan scored 11 of her team-high and season-high-tying 17 points and Reili Richardson scored 10 of her 12 points in the fourth quarter for the Sun Devils, who recorded a win over the No. 2 team for the first time since they defeated Stanford 70-63 in the championship game of the inaugural Pac-10 Tournament in 2002.  Ja’Tavia Tapley scored 16 points and Jamie Ruden added 12 points as the Sun Devils used an outstanding team effort to hold the Ducks and their top-ranked scoring offense more than 23 points below their scoring average of 89.3 points coming into the game.   Another key for the Sun Devils was free-throw shooting, as Arizona State knocked down 86 percent of its free-throw attempts (19-22) on the night.

On Sunday, Arizona State limited Oregon State to nearly 30 points below their scoring average of 76.5 points coming into the game, winning 55-47.  Tapley paced Arizona State in both points (14) and rebounds (6), while Richardson and Ryan added 10 points each for the Sun Devils, who forced the Beavers to shoot 31 percent for the game, including a paltry 10 percent from beyond the arc (2-20).

IMPACT ROOKIES: These are the 5 women’s basketball freshmen standing out

Sunday’s game concluded a stretch in which the Sun Devils played four Top 25 teams – No. 18 Arizona, No. 10 UCLA (now No. 8), No. 2 Oregon and No. 3 Oregon State – in their first five Pac-12 Conference games, with Arizona State going 3-2 in those games, with a win over USC in between.

Up next for the Sun Devils is a trip to the Pacific Northwest for games at Washington on Friday, Jan. 17 and at Washington State on Sunday.

South Carolina is the new No. 1 in the AP Top 25 women’s college basketball poll

For the fourth time this season, there’s a new No. 1 in women’s college basketball. The South Carolina Gamecocks lead the new AP Top 25 Poll, and newcomers Iowa and Arizona State appeared this week. 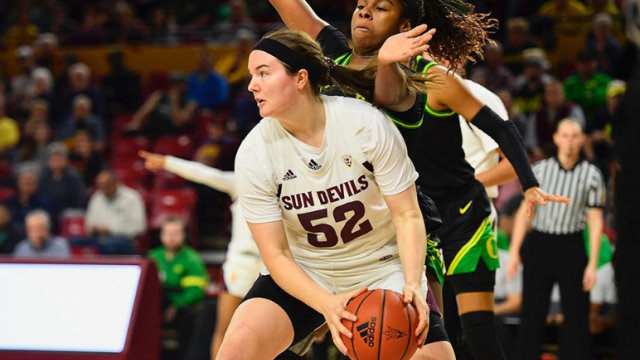