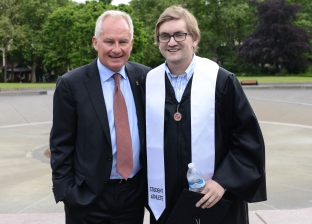 Steven Jenkins spent 15 years trying to earn his bachelor’s degree at Seattle University, dogged by health problems so severe they nearly killed him.

Born with cystic fibrosis, he survived a double-lung transplant. Then he developed a brain tumor. Strong chemo and radiation put the tumor in remission, but life-threatening cases of swine flu and pneumonia caused his body to reject his lungs, leading to a second transplant.

Yet Jenkins also played for Seattle U’s soccer team, where he was such an inspiration that coach Peter Fewing credits him with helping the team win the national championship in 2004.

On Sunday, Jenkins donned a cap and gown and accepted a bachelor’s degree in criminal justice. It was an emotional moment for many at the Jesuit school.

“I don’t know anybody in my 25 years at this school who’s gone through as much as he’s gone through to get this degree,” said J.B. Helfgott, professor and chair of criminal justice. “I have never seen anything like it in my life.”

Seattle U president Stephen Sundborg, who gave Jenkins a full-ride soccer scholarship despite his diseased lungs, called it an amazing story.

“The number of times through the years he almost didn’t make it, the way the other players responded to him — the family is heroic, and so is Stevie, for just persevering through it all,” Sundborg said.

Fewing said Jenkins “was not a token sick guy on the team — we brought him on because we thought he could help us, and we thought we could help him. We knew he was going to educate our guys.

“He was a good soccer player,” Fewing added. “He just couldn’t run.”

Last week, the slim 33-year-old with shaggy brown hair juggled a soccer ball on Seattle U’s field, looking fit, if a bit wan. He’s just recovered from another hospitalization, this time for meningitis.

He shrugs that off as a minor setback. Three years ago, after his first lung transplant failed, he lived in the shadow of death for months, bedridden and barely able to move.

Son of a Sounder

At the age of two, Steven Jenkins was diagnosed with cystic fibrosis, a progressive genetic disease that causes persistent lung infections and limits a person’s ability to breathe.

But Jenkins loved soccer. Keeping the disease a secret from everyone but his high-school coach, he played for his Kentwood High team — and took some abuse from fellow players for not being able to run well.

Fewing knew the family and Jenkins’ spirit, and when he asked Sundborg about bringing him to Seattle U and putting him on the team, Sundborg went a step further, offering him a full-ride soccer scholarship.

At first, Jenkins’ lungs were working well. He was on the team in 2002 and 2003, and played in four games. His health deteriorated in 2004, and he had to sit on the bench. But even when he wasn’t on the field, the team looked to him for inspiration.

Fewing remembers putting his team through a punishing running drill one day, and as he asked them for more, his players started to fade. But then, for the last few sprints, they gave it their all.

Fewing later realized they’d looked across the field and seen Jenkins running a drill of his own, pushing himself with his damaged lungs.

In 2005, the disease worsened. Jenkins had to withdraw from school and move back home. He got on the list for a transplant and tried to stay healthy. But his lung function dipped to 17 percent. “I was pretty close to not making it,” he said.

In an 11-hour surgery in March 2007, Jenkins received new lungs. By the fall, he was back in school.

But soon afterward, he began experiencing bad headaches. In December, a doctor discovered the cause: a three-inch tumor under his brain.

When a first round of chemo did nothing, doctors told him his chances of beating the tumor were less than 20 percent. Jenkins hung on to those odds. Perhaps, he reasoned, he’d be one of the lucky ones.

He underwent strong chemo and a stem-cell transplant, as well as radiation that made his throat so sore he couldn’t eat solid food for two months.

Wiped out, Jenkins didn’t re-enroll in college right away. But by the middle of 2010, he started to feel like himself again. He began to look forward to going back to school.

And then in December of 2010, he came down with swine flu and pneumonia, which caused his immune system to begin to reject his lungs.

This time, he was ineligible for a lung transplant, having had cancer a little more than two years before. Because donor lungs are so scarce, under transplant rules he needed to be in remission for at least five years.

“I was devastated,” he said.

His parents did some research and found that the Cleveland Clinic in Ohio was willing to bend the rules and take his case. Jenkins moved to Cleveland.

His sister Kelsey was on the verge of dropping out of Seattle Pacific University and moving to Cleveland to support him when he got a call from Dr. Michael Mulligan, the director of the Lung Transplant Program at UW Medicine.

I’ve looked into your case, the doctor told him. Come back to Seattle. We’ll do it here.

Jenkins went back on a waiting list for new lungs in June 2011, but he was low on the list because he’d already had one transplant. His health steadily declined. By early 2014, he was living on the first floor of his parents’ house in Kent, bedridden and on oxygen.

“I felt so lonely, so depressed,” he said.

In February, he called his old soccer coach for words of inspiration — a conversation Fewing remembers well.

“So I’m on the phone with him, and he’s really struggling, and I said we would pray together,” said Fewing, who caught the call on his cellphone while he was in the driveway walking toward his house. “I got on my knees. It was raining a little bit. I just prayed. I could not tell you what I said.”

But for Jenkins, it was a turning point, a powerful moment that helped him hang on. He thought to himself, Lord, my life is yours. If I make it through this surgery, I’ll do what you want.

One month later, on March 3, 2014, the call came from the hospital: A match had been found.

Jenkins posted a message to friends on Facebook before his family rushed him to the hospital. Tonight’s going to be a long night. If you want to stay up with me, come to the hospital. You know what’s happening.

This time, the surgery did not go as well. Jenkins’ kidneys stopped working, and he gained 30 pounds of fluid in 24 hours. Doctors warned he might not make it. Surrounded by friends and family in the intensive-care unit, half-conscious, Jenkins rallied. His kidneys started up.

Jenkins started back at Seattle University in early 2016, beginning with a single class. When it went well, he took two more. By winter 2017, he was taking three classes. He needed to finish three more courses this spring to graduate.

Still, it was touch-and-go. In March, he came down with the flu and pneumonia. Three weeks ago, he had a case of viral meningitis and shingles.

“These are speed bumps for me,” he said. “I didn’t want anything to get in the way of graduating.”

Helfgott, the criminal justice professor, said through it all, Jenkins kept working on his degree, taking some online courses and keeping in contact with his professors via email.

Jenkins thinks often about the prayer with Fewing, and how he can make a difference in life. After graduation, he’ll do an internship with Urban ArtWorks, a Seattle nonprofit that offers opportunities for artists and young people to work together to create public works of art. He’s spoken to a class at a Seattle elementary school about the importance of perseverance, and he’d like to do more of that.

“Everyone has the ability to make a positive impact on the world,” Jenkins said. “Hard work, believing in yourself and persevering — I just want to convey that message to anyone and everyone.”

He’s deeply grateful to the university for its support — especially Fewing, Sundborg, his professors — and to his family, including his sister and his mother, Barbara.

Jenkins knows the world is full of germs and infections. Every time he goes outside, he risks catching something that puts his life at risk.

But he isn’t about to stay inside.

He shakes hands to say goodbye with a firm grip, and without fear.

“I can’t live in a bubble,” he said. “That’s not why I got lungs. I went through the hardships of getting them to live a full life.”

This article is written by Katherine Long from Seattle Times and was legally licensed via the Tribune Content Agency through the NewsCred publisher network. Please direct all licensing questions to legal@newscred.com.