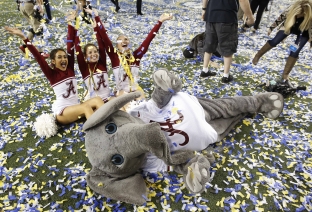 So, you want to make it to the College Football Playoff? Here’s how.

Before we get into this, though, we know what you’re probably thinking: “Why do I need a guide to the College Football Playoff? Shouldn’t I just win every game by a boatload of points?”

Well sure, that’s one way to do it. But it’s not the only way. Statistically speaking.

You can thank us in Atlanta on Jan. 8 when you’re the last team standing:

Alabama is the only team to have made the College Football Playoff in each of the three years of the playoff’s existence. Being the Crimson Tide is about as close to getting a guaranteed ticket to the CFP as you can get. In 2014, Alabama lost to eventual champion Ohio State in a semifinals game. In 2015, the Tide beat Michigan State in the Cotton Bowl, then Clemson for the national title. And in 2016, their 14-0 record came to an untimely death in a rematch in the title game that Clemson won 35-31. That 1-for-3 record isn’t as good as Clemson and Ohio State’s (both 1-for-2), but if you want a surefire way to be playing in the CFP, being from Tuscaloosa seems to be a pretty solid plan.

2. Lose once, but definitely not twice

“Hold on,” you might be saying, “Wouldn’t it be smarter to not lose once?” Sure, sure. You could do that. But the brief history of the CFP shows us that nine of the 12 participants have finished the regular season with one loss. Interestingly enough, of the three that entered the CFP at 13-0 (2014 Florida State, 2015 Clemson, and 2016 Alabama), none won the title.

RELATED: How teams can lose at home and still win a national title

Another route to the CFP, historically, is to drop a game to an unranked opponent. In 2014, Ohio State lost its second game of the year at home to Virginia Tech, and the Buckeyes ended up winning the title. In 2015, Oklahoma and Michigan State lost to unranked foes and still made the CFP (though they lost in the semifinals). Last year’s champion, Clemson, fell to Pittsburgh in its 10th game of the regular season and still hoisted the trophy. In the CFP, it’s clearly been better to go in with a loss than to go in undefeated.

MORE: Behind the numbers of the Week 5 AP Top 25

While the 12 previous CFP teams have started the season ranked anywhere from No. 1 (2014 Florida State and 2016 Alabama) to No. 19 (2015 Oklahoma) with an average preseason rank of No. 6, they each made it into the Top 5 of the AP poll at some point in the season. All but 2014 Ohio State and 2015 Oklahoma went the extra step and snuck into the top four.

4. Win your conference championship game (or be Ohio State/Oklahoma)

For the most part, this rule is pretty straightforward. As of this year, finally, all major conferences have a championship game. Win that.

We’ve had two minor exceptions. In 2016, Ohio State didn’t even play in its conference championship game. Penn State — which gave the Buckeyes their lone loss — went to the Big Ten title game and won. But the Nittany Lions didn’t follow Rule 2 — they lost twice on the year. So they didn’t make the CFP. OSU did.

5. Score a boatload of points

From 2014-2016, the average points per game among all FBS teams was 29.44. The average points per game for the 12 CFP teams in that span was 40.23. Mathematically, that’s a boatload. Oregon in 2014 had the boatloadiest average with 46.31 PPG during the regular season, while 2015 Michigan State trails the parade with a paltry 32.08. But this isn’t Thermopylae, don’t follow the Spartans’ lead. If you want to make the CFP, have no mercy.

So there you have it. Six steps to getting your team into the College Football Playoff. Nothing’s guaranteed, remember. But follow this plan and you’ll have a shot.