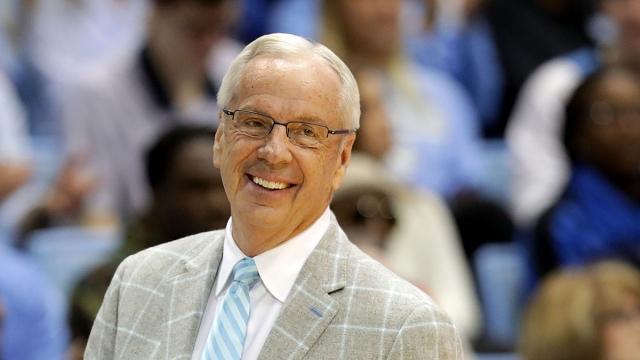 A fond farewell to coach Roy Williams, who retires with 903 wins, 3 national titles and many unforgettable moments

INDIANAPOLIS – And so, the exit of legends begins. Dadgum it.

Roy Williams is leaving, with his emotions bare to the world, as they always have been. If it’s sheer numbers we want, there are the three national championships, the nine Final Fours, the 903 wins . . . or the thousand tears. Because we’ve always known where Williams’ heart stood.

That was true whenever he would mourn the latest NCAA tournament loss, ending a season now gone forever. His mentor and hero Dean Smith always told him that his biggest worry about Williams being a head coach was how hard ol’ Roy took defeat as an assistant.

That was true after the 2003 national championship game, when Kansas had just lost a crusher to Syracuse and an CBS interviewer put a microphone in Williams’ face as he left the court, wanting to know about him taking the North Carolina job. “I don’t give a (blankety-blank) about North Carolina right now,” he answered to all of America watching, saying he just wanted to tend to his heartbroken Jayhawks. Later he would say, “Coach Smith will be disappointed in my blankety-blank, but he understands.”

That was true in 2012 when doctors found tumors on his kidneys and told him there was a 95 percent chance it was cancer. His first thought was of the mother who died from the disease. His second thought was about the grandkids who would never remember him. He was scared and he didn’t care who knew it. The tumors turned out benign.

And that was true Thursday, as he said goodbye in Chapel Hill, when it only seemed like yesterday he was saying hello. He arrived from Kansas a week after that 2003 title game loss and some voices shredded him for the move. But why? He had given the Jayhawks 15 great years and besides, he was going home to his alma mater. Back to where he kept stats for Smith and then worked for him as the lowest assistant on the ladder, paying the bills by driving around the state and selling Tar Heel calendars out of his trunk to gas stations. A man should be allowed to return to his roots without dodging bricks.

Williams is 70 years old, so you can’t say this is a shock. Thinking back on his press conference after the Tar Heels were run over by Wisconsin in the first round in Indianapolis, there were certainly phrases suggesting a man going through some reflection.

“It’s been a hard year to push and pull, push and pull every other day to try to get something done. But how can you be any luckier than Roy Williams coaching basketball?”

“Basketball can be the greatest game in the world, but when you lose it’s like somebody reaches in and grabs your heart and shakes it right in front of you. Sort of taunts you a little bit. But coaching basketball, that’s pretty dadgum good.”

“I started this season when I was 70 years old. I feel like I’m 103 right now. It’s been a trying year. It’s been a year that I haven’t enjoyed that much. It’s been a lot of stresses, a lot of things (going) on.”

There was the pandemic, of course. Not a coach in America had it easy this year. Not a player. Not a person. And the Tar Heels had their struggles. It will always be unfortunate that his 106th and last NCAA tournament appearance was a 23-point blowout loss. Well, at least he won his final two Duke games.

As Roy Williams leaves the stage, you wonder: Who’s next to do the same thing?

When do we hear these words from Jim Boeheim, who is 76? Mike Krzyzewski, who is 74? Leonard Hamilton, who is 72? Rick Pitino, Bob Huggins and Tom Izzo, who are 68, 67 and 66? The coaching landscape in college basketball would seem close to throwing a massive, ongoing retirement party. Even John Calipari is 62. That’s not old by any means given today’s standards, but John Wooden was viewed as an elder statesman and patron saint of the game when he stepped down after his 10th national championship at UCLA. He was 64.

Given Williams’ passion for golf, there would seem to be many more tee times in his future, leaving behind a legacy that has several side angles. He coached at two of the Meccas of college basketball and ended up No. 2 in career victories at North Carolina and No. 3 at Kansas. That’s not easy to do. He was always a natural figure for fun with his mannerisms and colloquialisms, but endured genuine criticism and scrutiny when an academic scandal blew through the university, with basketball names included. He expressed constant anguish about the charges, while proclaiming his innocence. One thing was beyond dispute: North Carolina never became a one-and-done station like Kentucky and Duke.

And there can certainly be no question about the greatness of his record. Williams might never have been mentioned in quite the same hushed reverent tones as some of his peers on the all-time list, but know this:

He won more national championships at North Carolina than Dean Smith did.

In his 18 years at North Carolina, he went to five Final Fours. Down the road at Duke over the same span, Krzyzewski went to three.

Ol’ Roy did all right. But on Thursday he departed, leaving the door ajar for those coming behind.