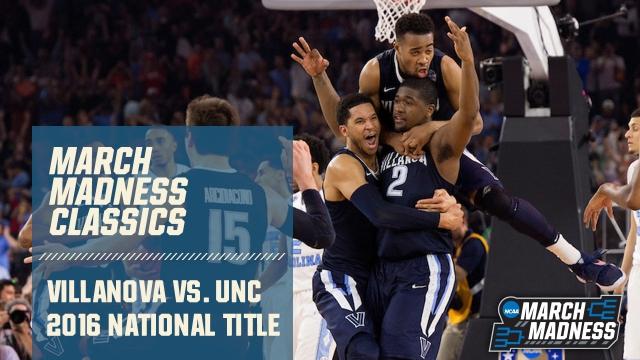 
Remember the line from Herb Brooks’ famous pre-game pep talk to the U.S. Olympic hockey team before the Miracle on Ice?

Well, here was certainly a great opportunity for the Villanova Wildcats, that night in Houston in 2016. North Carolina had just tied the national championship game on a Marcus Paige double-pump 3-pointer with 4.7 seconds left. It was the kind of save-the-day shot that would never be forgotten. Unless…

The Wildcats called timeout to set up a last play, but at that point, most everyone was thinking overtime. Everybody in the Tar Heels section, certainly. Let Villanova guard Ryan Arcidiacono take it from there, since it was his job to get the ball up the court.

“We drew up a play, we knew what play we were going to at the end of the game, because we work on it every single day in practice. I wanted to be aggressive. If I could get the shot, I was going to shoot it. But I heard someone screaming in the back of my head. It was Kris.”

Kris Jenkins. He had inbounded the ball, and then curled behind Arcidiacono, like a lion waiting for his chance to pounce. As the Tar Heels scrambled to stop Arcidiacono’s progress and cover assorted other Wildcats, the trailing Jenkins had been overlooked a fatal few seconds. He was left with just enough open air to do something epic. “Arch! Arch! Arch!” he shouted. Great opportunity, and then a great moment. Pass from Arcidiacono, shot from beyond the 3-point line, swish, buzzer, championship. One of the most dramatically won ever in the Final Four, and that’s a high bar.

It was yet another keeper for the highlights of the future, showing how something truly magical can happen so suddenly in the NCAA tournament. For look at all that was jammed into those 4.7 seconds.

The glorious and indisputable validation of Jay Wright’s Villanova program. The Wildcats had become notorious for their early tournament flameouts. Not anymore.

The pure anguish of a team that had fought from six points behind in the last two minutes, but just watched a game — and maybe a national title — vanish before its collective eyes. “That feeling of walking off the court, feeling the confetti fall, but it’s not for us, it’s a horrible feeling,” North Carolina’s Joel Berry II said.

The poise and confidence of Jenkins, who with an entire program’s dreams in his hands, never flinched. He knew just where to find the open spot, trailing Arcidiacono, and knew just what to do, when he got the ball. “I think every shot’s going in,” he would say later. “This one was no different.”

The unselfishness of Arcidiacono, who at that instant was the very symbol of the Villanova way of doing things; team pursuits over all else. How many seniors would try to create a chance to win it by themselves in that situation — maybe 99 out of 100? But he chose to flip the ball away to someone else, because it was the correct thing to do. “It’s not about me taking the right shot, it’s about me making the right read. I think I just did that,” he said afterward. “It shows what type of teammate he is, what type of person he is,” Jenkins said.

The bittersweet mixed feelings of a family drama, for Jenkins is the adopted brother of Nate Britt — who came off the bench to play for North Carolina. “I’m not going to say too much to him tomorrow,” Jenkins said.

A boost for the newly reborn Big East, which was trying to establish its credentials on the national stage with the heavyweight conferences. “I hope the power-5 schools can see that we’re really important to college basketball,” Wright said.

Put all that together and it was such a perfect way to decide a national champion, with all the subplots, and all the drama, and the last shot in the last second. That doesn’t happen very often, but when it does, the deep emotional currents of this event are never more real, or raw. The heartbroken losing coach understood that as well as anyone that night.

“The difference between winning and losing in college basketball is so small. The difference in your feelings is so large,” Roy Williams said. “But that’s the NCAA tournament.”

There would be a postscript, of course. The returning Tar Heels used the pain from that night to drive them the next 12 months. Redemption was their mission. Not until they cut down the nets as national champions 364 days later, could they try to forget those 4.7 seconds.