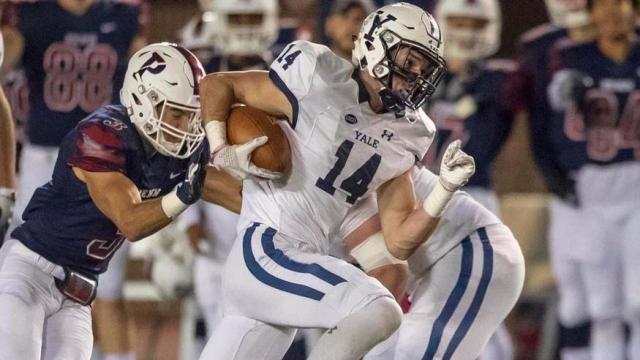 Just one FCS football program has topped 900 all-time wins. That honor belongs to Yale, who finished the 2019 season 9-1.

Here are the nine winningest FCS teams in college football history, as of May 8, 2021. The Ivy League — well-represented on this list with five programs — did not participate in the 2020-21 season due to the COVID-19 pandemic.

*Win-loss records were originally pulled from NCAA.org’s post-2018 record book. Results from the 2018-19, 2019-20 and 2020-21 seasons have been added to each school’s record on this list. All records include bowl games and playoff wins/losses.

As one of the oldest college football programs, Yale owns 18 NCAA-recognized national championships, 15 Ivy League titles (last one coming in 2017) and two Heisman trophy winners (1936, ’37). Sixty-eight of Yale’s all-time wins have come against Harvard in DI football’s third-most played rivalry known simply as “The Game.” The Bulldogs hold a 68-60-8 edge over the Crimson, including their 50-43 double overtime win to close out 2019.

Harvard football has eight national championships along with 17 conference crowns since the Ivy League’s inception in 1956. While Yale has more all-time wins in the the historic rivalry, Harvard has won The Game in 15 of the past 19 matchups since 2001.

Penn’s 1,403 games played seasons is an NCAA football record across all divisions. The Quakers are also tied for fourth in the FCS record books for longest winning streak since 1978 (24; 1992-95) and have the longest conference win streak in Ivy League history (20; 2001-04). Penn is just behind Dartmouth for most conference titles (18), with its most recent one coming in 2016.

Princeton played in the first-ever college football game in 1869 against Rutgers. Since then, the Tigers have had 28 undefeated seasons, including a 10-0 finish for the Ivy League title in 2018. Princeton scored a program- and conference-record 47 points per game in 2018.

North Dakota State was the team of the past decade, winning eight of the nine FCS championships from 2011-19 — a subdivision record. The Bison have the most wins in FCS play since 2010 and boast a 36-3 all-time record in FCS playoff games.

Dartmouth has one national championship and 19 Ivy League titles (including 2019) in its 138-year program history. The Big Green have failed to finish .500 or better in a season just once since 2010.

Delaware has 17 all-time appearances in the FCS playoffs, including a semifinal run in the spring of 2021. The Blue Hens’ 2003 FCS championship win is one of six national titles in program history at any level. Delaware went 7-1 in 2020-21 for its fifth playoff appearance since that 2003 championship.

Lehigh represents one half of college football’s most-played rivalry, known as “The Rivalry.” Seventy-one of the Mountain Hawks’ 694 all-time wins have come against top foe Lafayette. Lafayette leads the series 79-71-5, including a 17-16 2019 win. Lehigh finished 0-3 in 2020-21.

Dayton has gone more than four decades without being shut out — a streak that started when the Flyers were still in Division III. That’s a good formula for putting up wins. Dayton had the highest winning percentage among FCS teams in the 1990s (92 wins, .844) and the second highest in the 2000s (87 wins, .791).