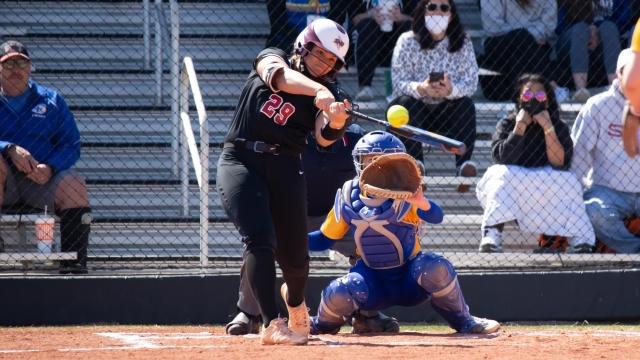 There are power hitters, timely hitters and those who hit for average. But this list features nine of the best all-around hitters in DII softball.

To make this group, players must’ve appeared in at least 20 games this season. Statistics are accurate through April 19. Hitters are listed in alphabetical order.

Bailey Byers has the second-highest slugging percentage in DII at 1.122. The senior ranks fifth in home runs per game (0.44) and runs scored per game (1.40). Byers also has 11 home runs, an on-base percentage of .573 and is currently batting .524. That average at the plate ranks fourth among hitters that’ve played in 20 or more games.

Right behind Byers in slugging percentage is Faith Willenbrock with 1.087. Her 17 home runs and 0.53 home runs per game are tied with Shippensburg’s Hannah Marsteller for second in the nation. The catcher, who is batting .476, also has 49 hits and 37 RBI this season.

No player has a higher slugging percentage than Hannah Marsteller, who’s currently at 1.154. And she’s threatening to grab first place in four other categories. As mentioned earlier, the sophomore’s 17 home runs and 0.53 home runs per game are tied with Willenbrock for second. Marsteller is also in second place when it comes to total RBI (52) and RBI per game (1.62). She’s batting .484 this season.

Kiley Robb is one of two Blazers on this list. The redshirt sophomore’s 14 home runs are tied with Central Oklahoma’s Shayla Harper for the fourth-most in DII. Robb also has 43 RBI, 38 hits and seven doubles while hitting .400 and slugging .916 in 2021.

Mahina Sauer is hitting .476 and slugging .903 with an on-base percentage of .561 for the Crimson Storm this year. The senior’s 43 RBI are tied with four other players (including the aforementioned Kiley Robb) for the eighth-most in DII. She also has 11 home runs and 11 doubles.

Already one of the country’s best power hitters, Nicole Pennington’s on-base percentage of .579 ranks sixth among players that’ve appeared in at least 20 games. She leads DII in total home runs (18) and home runs per game (0.56), while her 45 RBI are the sixth-most for any batter. Meanwhile, the junior’s slugging percentage of 1.074 ranks fourth.

Another hitter known for her power, Ruby Salzman is batting .432 and slugging .780 this season. She ranks seventh in the nation with 44 RBI and is averaging 1.22 RBI per game. Her 57 hits are tied with West Florida’s Teala Howard and Lubbock Christian’s Savannah Wysocki for the third-highest total. Salzman also has nine home runs, nine doubles and six triples.

Tatum Brummitt is currently batting .494 for the Braves this season. She’s driven in 31 runs while hitting 11 doubles and seven home runs. The redshirt junior also ranks ninth in slugging percentage (among players eligible for this list) with a .949 average.