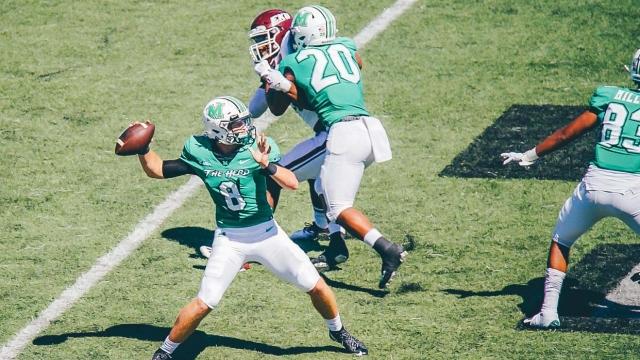 
The first FBS Saturday of the 2020 college football season is in the books. Six games headlined a continuation of the game’s highly anticipated return. As expected, the schedule delivered with plenty of points and memorable moments. Here are 7 notable things we saw:

ESPN’s College GameDay has been around since 1987 and began on-location broadcasts in 1993. On Saturday, Rece Davis was in the studio at ESPN while Lee Corso, Kirk Herbstreit, Desmond Howard and Maria Taylor were all remote. The show will be back on the road next week. Below, Desmond Howard shared his temporary setup.

To kick off this unusual Week 1 of our 2020 @CollegeGameDay season, @espn was like… pic.twitter.com/zpxcan9VuU

If college football awards were given out after Week 1, Marshall quarterback Grant Wells would have a case for some serious hardware. The freshman had a perfect first quarter, starting 8-for-8 with 176 yards and two touchdowns, throwing his first incompletion in the second quarter of Marshall’s 59-0 home rout of Eastern Kentucky. Wells, playing an hour outside of his hometown, didn’t appear jittery before his first game. Instead, he displayed the composure of a multi-year starter.

Wells ended the game with 307 passing yards and four touchdowns.

How about the hometown QB Grant Wells?!?!

3. Army football is back in business

Army came into 2019 thinking about another double-digit win season with a national ranking. Instead it stumbled to a 5-8 record. But the Black Knights rebounded well to open the new season. Army shut out Middle Tennessee 42-0, controlling the ball for more than 35 minutes and converting 13-of-15 third downs. But the most eye-popping statistic was a 19-play, 99-yard drive in the third and fourth quarters that ran 12:23 off the clock, during which Army exclusively ran the ball and was one of two 19-play drives for the Black Knights.

Texas State head coach Jake Spavital didn’t call plays during his first season, a 3-9 finish for the Bobcats after averaging 18.4 points and just under 318 yards per game, specifically struggling to run the ball. That prompted a change with Spavital taking over playcalling duties in 2020. Despite a 31-24 loss to SMU, the Bobcats’ offense was nearly 100 yards better than its 2019 average, particularly on the ground where it picked up 189 yards.

Brock Sturges turns the corner for the first Bobcat touchdown of the 2020 season! All tied up 7-7 with 4 minutes remaining in the first half. #EatEmUp pic.twitter.com/Hjfk1B3COr

SMU had no problems putting up yards or points a year ago, when it averaged nearly 42 points and 490 yards per game. But replacing the production of a leading rusher and receiver in the same offseason can be difficult to manage. Just don’t tell that to head coach Sonny Dykes. SMU’s offense didn’t miss a beat, piling up 544 yards in the win. One negative? The three turnovers.

If you were expecting this to be about an angry vegetable, think again. North Texas quarterback Jason Bean made his first career start, opening a 57-31 Mean Green win over Houston Baptist with touchdowns on each of the first three possessions. The redshirt sophomore doubled his career scoring total three minutes into the second quarter, leading UNT on drives of 74, 75 and 95 yards. Bean finished with 217 passing yards and four total touchdowns, stepping into the starting role after Mason Fine had been under center for the past three-plus seasons. Fine left some big shoes to fill, but Bean answered the call in his first test.

.@MeanGreenFB strikes on their opening possession!

When All-American running back Kenneth Gainwell opted out of the 2020 season on Aug. 31, first-year head coach Ryan Silverfield had less than a week to plan to replace over 2,000 scrimmage yards and 16 total touchdowns. Rodrigues Clark was the Tigers’ fifth-leading rusher — with 85 yards— a year ago before being thrust into the spotlight Saturday night. The sophomore went for over 100 yards and touchdown in his first career start while Silverfield got a win in his home head coaching debut as the Tigers pulled away from Arkansas State for a 37-24 win.

After a 1-0 start to 2019, UTEP was unable to get back into the win column last season. The Miners got down 14-3 early in the second quarter of their season opener before rallying for a 24-14 win over Stephen F. Austin. Deion Hankins, a freshman from El Paso, put UTEP ahead just before halftime and the defense kept SFA off the board over the final 30 minutes to put an end to an 11-game losing streak while avoiding an FCS over FBS upset. UTEP quarterback Gavin Hardison led the Miners offense with 212 yards and a touchdown in his first career start while Hankins added 113 yards on the ground and two touchdowns.

The Miners have the lead! pic.twitter.com/DPIUKJ13bZ

Share. Twitter Facebook Google+ Pinterest LinkedIn Tumblr Email
Previous ArticleFINAL LAPS: Brandon Jones comes out of no where to pass Hamlin, Chastain for the win
Next Article Jimmie Johnson: I’m all in on the Cowboys…I think they’re as talented a team as there is in the league