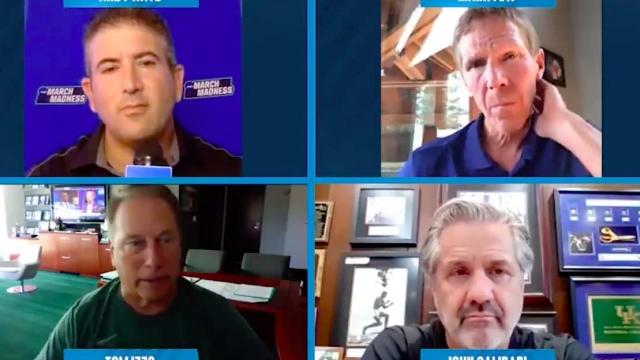 7 insights from John Calipari, Mark Few and Tom Izzo on college hoops in 2020

Watch the full discussion at the top of the page. Below are seven insights from the conversation:

On the lives of Lute Olson and John Thompson

Hall of fame coaches Lute Olson and John Thompson passed away on Aug. 27 and Aug. 30. Both were titans on the sideline, each winning a national championship and over 500 games. Calipari, Izzo and Few looked back on how Olson and Thompson helped shape their careers.

1. One of Calipari’s memories of John Thompson came during a recruiting trip. Thompson entered the gymnasium and was greeted to a standing ovation while Calipari exited through the back of the building.

“If you walked in the gym and you were recruiting somebody and they were in there, oh you left,” Calipari told Katz.

2. Off the court, Calipari cited Thompson’s bravery when the former Georgetown coach put his career on the line and brought change when a rule regarding test scores could have potentially jeopardized scholarship opportunities.

3. Izzo noted how Olsen and Thompson were opposites in how they worked, but that both were successful.

4. When Few started at Gonzaga, Olson was in the middle of one his best stretches at Arizona. Few remembers Olson for treating him like an equal, referring to him as the epitome of class.

“On the Nike trips, he [Lute Olson] always just accepted me and put me in his golf group when I didn’t really know anybody and was really unsure of myself starting out in coaching.”

The Division I Council is set to meet on Sept. 16 and could make recommendations on a start date for the upcoming college basketball season. Here’s where Calipari, Few and Izzo stand on potential start dates for the season and how they would approach a bubble and non-conference scheduling.

5. Few mentioned the week of Thanksgiving as an optimal start date for the new season. He also noted Gonzaga as having a bubble-like atmosphere when campus is empty.

“Outside of the NBA and NASA, it’s probably about as safe as you could ever hope for … it’s imperative that we do everything we can to have some sort of season.”

“Outside of the NBA and NASA, it’s probably about as safe as you could hope for.”@ZagMBB’s Mark Few discusses scheduling & bubble options with Tom Izzo and @UKCoachCalipari on the #MM365 pod w/@TheAndyKatz:
🎧 https://t.co/zpcSxPxl97 pic.twitter.com/8tXC9nSN8U

6. Izzo joked that his wife wants MSU to play and that she might be sick of him. In all serious, the Michigan State coach focused on mental health. He expressed the importance of understanding where his players are coming from and making an effort to help them.

“This isn’t about trying to get better and win games. We just want to play good competition, give our kids as normal of a college year as they can have and not worry about our records for one time in our life. Just worry about the betterment of the game and our country.

“We just want to play good competition, give a our kids as normal of a college year as they can have and not worry about our records for one time in our life. Just worry about the betterment of the game and our country.”

7. Calipari started off by pointing out that college basketball has a path to a working bubble with how the WNBA and NBA have operated. Two issues he was particularly passionate about are keeping a non-conference schedule and helping smaller schools to ensure that they continue playing.

“There is not going to be competitive equity. We may not play as many games as Tom and Mark’s teams. That’s too bad.”