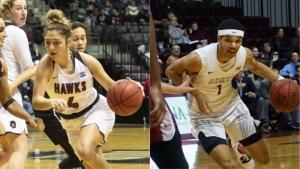 
Conference tournaments are quickly approaching and that means the DII men’s and women’s basketball championships are right around the corner. As the top teams begin to separate themselves from the pack, let’s take a look at a few schools that could make deep runs in their respective brackets.

Let’s see which schools have a chance to reach the Elite Eight this season.

BRACKETS ARE HERE: Print your DII men’s bracket | And women’s

Now, we’re a lot higher on the Lady Buffs than the latest WBCA rankings show as they have climbed our Power 10 rankings in each of the past two weeks, currently sitting at No. 9. The men’s team has rolled to the Elite Eight in each of the past two seasons and with Joel Murray and Qua Grant leading the way, a third time is very possible. The women’s team will have a lot to overcome in their conference alone — with reigning champion Lubbock Christian and undefeated Texas A&M-Commerce both worthy adversaries — but remember this: we had the Lady Buffs a top 10 team entering the season. Now that they have recovered from some injuries, they are playing like that once again.

The women’s squad has become an Elite Eight regular the past few seasons. Over the past two-plus seasons, the Crimson Hawks have gone 80-9 with both the 2018 and 2019 seasons ending in the DII women’s basketball championship semifinals. In our latest regional predictions, we have IUP the clear-cut leader in the Atlantic, but it will face some tough competition come tournament time. Now, the men’s team has shown it is a bit vulnerable away from home, but if our current projections are correct, the Crimson Hawks are in line for the top seed in the Atlantic, ensuring they’ll host the regional and play at Kovalchick, where they are 30-2 over the past two years.

You would think the Lakers’ women’s squad — a top-3 team in the country with a mere one loss to their name — would be the stronger contender to reach the Elite Eight, but anyone that follows DII women’s basketball knows that’s far from the case. The current top 3 teams in the country are all in the Midwest Region, making it the toughest in the land. There are simply no guarantees for any team, but the Lakers are as formidable as any opponent in that part of the bracket. The men are having a breakthrough year, just two wins shy of their first 20-win season in a decade, and are near the top of the Midwest Region rankings. Bellarmine and Ferris State will be tough tests, but this team is more than capable of a little March magic.

CIAA CELEBRATES 75: The CIAA tournament is a gold mine of college basketball history

The men’s Tritons team is one of the scariest in the nation and certainly the best in the West right now. They’ll get a chance to avenge their lone loss of the season this week against Chico State and already have a win against four of the five remaining teams on their schedule. The women have their work cut out for them, sitting in a region with Azusa Pacific, Alaska Anchorage and Hawaii Pacific, a team the Tritons already lost to this season. But this team is surging, and this time of year, we know the hottest teams are sometimes the ones that make the deepest runs.

Walsh: The women’s team — currently No. 12 in DII women’s basketball — has the unfortunate task of playing in the Midwest Region, yet another top 15 team that looks tournament bound. The men’s team — which is an 18-win team receiving votes — is a very solid squad, despite seeing its 10-game losing streak snapped last week. This, too, is a deep region with Bellarmine, Ferris State, Missouri-St. Louis and Grand Valley State all in the top 20.

Azusa Pacific: It’s not a matter of not having the talent. Both the men’s and women’s teams are 16-3 and very good. They both play in a tricky West Region, especially those men with UCSD looking very strong. The women have a big advantage in that every starter from their 2019 Elite Eight run is back, so this team will know how to turn it on come March.