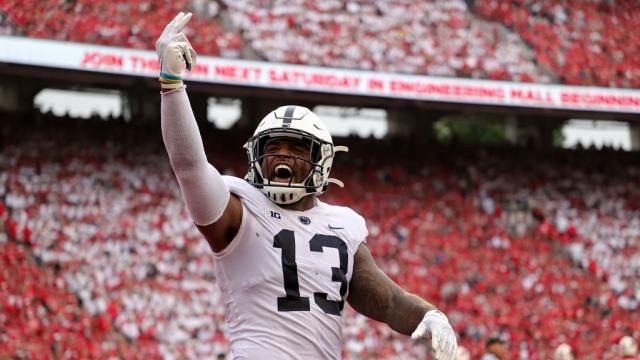 The first full college football Saturday of the season saw a top-5 meeting, ranked matchups, stellar debuts and a FCS shocker over a ranked team.

Here’s what you need to know from Saturday’s Week 1 action:

1. These teams stood out in an early season “prove it” Saturday

There were five ranked vs. ranked games on Saturday. Not bad for early September.

The biggest matchup rank-wise was over in Charlotte, North Carolina, where No. 5 Georgia took down No. 3 Clemson, 10-3. Defense was the big story from this one as both offenses combined for 434 yards and no touchdowns. The lone touchdown of the evening came courtesy of Georgia DB Christopher Smith, as he picked off Clemson’s DJ Uiagalelei and took it 74 yards to the house for the score. The Bulldogs’ defense also sacked Uiagalelei seven times — for reference, the Tigers allowed just 20 sacks all last season.

SCORES: Get final scores and stats throughout the country here

Another defensive battle came down to the wire as No. 19 Penn State defeated No. 12 Wisconsin 16-10. LB Ellis Brooks and S Jaquan Brisker put on a show as the Nittany Lions got coach James Franklin his first road win against an AP Top-15 team in his career. The icing on the cake were two interceptions in the final 3 minutes, giving Penn State its first win in Madison since 2013.

😱 @PENNSTATEFBALL WITH ANOTHER INT TO WIN THE GAME IN CAMP RANDALL!!! pic.twitter.com/jARAxZ6BwV

If you thought all the top teams in college football would have an easy road early in the 2021 season, think again.

Top teams like No. 2 Oklahoma, No. 7 Iowa State and No. 11 Oregon had close calls after entering as heavy favorites. The average margin of victory in their games was 6 points, with each game being decided late in the fourth quarter.

Nothing is given in college football. In any week, an elite team is at risk of losing.

3. Home-field advantage is a thing again

After a COVID-19 forced a 2020 season that limited crowd numbers, fans returned to college football stadiums around the country in Week 1. Not only could you see the fans in the seats this weekend, but you could hear them as well.

The Big House was rocking as Michigan put up 47 points with a new-look explosive offense. The “Iowa Wave” returned in Iowa City and the packed stadium saw No. 18 Hawkeyes get a blowout win over No. 17 Indiana.

Out west, No. 15 Southern California dominated California foe San Jose State in front of fans at LA Memorial Coliseum. Cross-town rival UCLA put together a statement win over No. 16 LSU, taking down the Tigers 38-27 in the historic Rose Bowl.

Now that fans are back, college football once again has some of the best environments in all of sports.

Week 1 of college football was full of surprises. On Friday, the first top-10 team fell as UNC lost to Virginia Tech. There also were three FCS-over-FBS upsets on Saturday alone. There were almost more. On Saturday, UNI pushed top-10 Iowa State late and fell short. However, Montana came up with a 13-7 victory in Seattle over No. 20 Washington. It’s the first win by an FCS team against a ranked FBS team since North Dakota State beat No. 13 Iowa 23-21 in 2016.

Moreover, teams that struggled in 2020 started fast, picking up an early victory. Maryland’s offense showed big-play potential behind QB Taulia Tagovailoa’s three touchdowns in a win against West Virginia. Even Kansas got a win, its first since 2019.

Expect the unexpected in the 2021 college football season.

5. New quarterbacks put on a show

Many quarterbacks across the country dazzled in their debuts this weekend.

The weekend started with Ohio State QB CJ Stroud throwing for four touchdowns in his first start. The quarterback play went to another level on Saturday. Kentucky’s Will Levis and Alabama’s Bryce Young each threw for 340-plus yards with four touchdowns in dominating win. Former Oklahoma QB Tanner Mordecai set the SMU record for single-game passing touchdowns with seven.

Then there’s South Carolina’s Zeb Noland. The grad assistant, who previously played at Iowa State and North Dakota State, needed to step in due to injury. He passed for 121 yards and four touchdowns in the Gamecocks’ 46-0 win against Eastern Illinois.

These quarterbacks not only put to rest any concerns about them being new starters, but they also showed that they are dynamic playmakers for their teams.