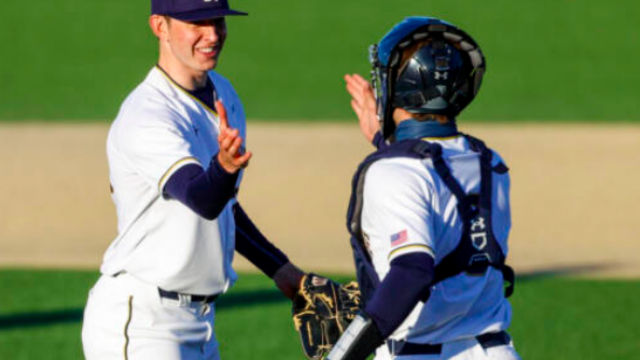 5 teams that have surprised in the 2021 college baseball season, and aren't done yet

We are inching closer to May and that means the 2021 college baseball season is starting to heat up. It may come as a surprise to you, but these five teams have been on fire since first pitch way back in the chilly days of February.

We’ll start in the ACC, where two teams kick off my list. Both teams entered the season projected to take dead last in their division. Now, both are in second place with plenty of signature wins and are certainly geared up for a run to Omaha.

Surprise, surprise: Keep an eye on these five teams down the stretch

Pittsburgh | ACC — The Panthers were expected to finish last in the Coastal division — and the ACC for that matter — but find themselves sitting at 20-11 and one game behind Virginia Tech for the division lead. That is an impressive leap for a team that was 10-6 when play halted last year and 21-34 in their last full season back in 2019.

Though the Panthers were swept earlier this season by Virginia Tech, they have put together a solid resume, highlighted by their first-ever series win against Florida State. They also swept Miami and won series against Georgia Tech and most recently North Carolina. That’s all added up to the highest ranking in program history as the Panthers are the No. 16 team in the country. This is a gritty team, with no real superstar but several very good players that can win in a variety of ways. Having Mitch Myers and Matt Gilbertson anchor the rotation certainly helps.

LATEST RANKINGS: Arkansas stays at No. 1 in D1Baseball rankings

Notre Dame | ACC — Like Pitt, many saw Notre Dame finishing in last place in the Atlantic Division. Link Jarrett thought otherwise. The Fighting Irish’s skipper came in and took the reins after a dismal 24-30 finish in 2019 and immediately changed the culture. The Irish were 11-2 when play stopped last year, and in 2021? We are two months into the season and the Irish have yet to lose a weekend series.

It was no easy task to get where they are. The Irish opened the season with three consecutive road series, and took down then-nationally ranked Wake Forest and Virginia, as well as Clemson, to start the season 7-2. They’ve been rolling ever since with wins against ranked teams all over their schedule. Niko Kavadas — who led the Cape Cod Baseball League with ten homers in 2019 — is once again one of the premier sluggers in DI, currently with 13 home runs and an .866 slugging percentage to lead the offense. Sophomore righty Tanner Kohlhepp leads the ACC in ERA for a pitching staff that has been quite dominant so far.

Charlotte | C-USA — The 49ers were projected to finish fifth in the East, but instead are sitting atop all of Conference USA with a 14-2 record (25-10 overall). Charlotte is also No. 19 in college baseball, returning to the national rankings for the first time since 2011.

This is a rather significant turnaround for the 49ers: They were 9-8 in last year’s abridged season and 21-31-1 in 2019. A large part of the charge has been led by Austin Knight. Not even a conference preseason All-American, Knight leads college baseball with 20 doubles while pacing the team in average (.336), runs scored (33), slugging percentage (.664) and RBIs (37). He’s also the only member of C-USA to appear on the Golden Spikes Midseason Watchlist. Charlotte was swept by ECU earlier this season, but this team seems to be different since then, going 17-4 since. With eight games left against No. 20 Old Dominion, we’ll see just how much of a surprise the 49ers are.

Indiana Sate | MVC — The Sycamores were picked to finish fourth in the Missouri Valley Conference. Much like 2019, when people slept on Indiana State, the Sycamores continue to climb the rankings, now at No. 21 in the country.

Despite dropping their opening series to Pitt, the Sycamores bounced right back and split with now-No. 6 Tennessee in Knoxville. That triggered a six-game winning streak, including taking a big weekend series from then-nationally ranked Florida Atlantic, once again on the road. Perhaps the biggest surprise is Geremy Guerrero. The redshirt-senior southpaw had primarily served as a reliever in his previous four seasons, posting a not-so-exciting 5.54 career ERA. This year, as a regular part of the rotation, Guerrero has been one of the best in college baseball sitting at 7-0 with a 1.11 ERA behind a 0.68 WHIP and a 67:9 strikeout-to-walk rate. Those are some absurd numbers.

Oregon | PAC-12 — Though that other Oregon team in Corvallis currently leads the PAC-12 baseball standings, the Beavers have yet to solve the Ducks this season. Oregon has taken five of six from Oregon State, including a sweep two weekends ago when both were nationally-ranked teams. Not bad for the team projected to finish seventh in their own conference.

The Ducks are No. 13 in college baseball. Let’s not forget, this team was 8-7 a year ago and 27-29 in their last full season. You think Aaron Zavala is excited baseball is back? The sophomore was hitting an impressive .418 through 15 games last year and hasn’t missed a beat in leading Oregon’s offensive attack. Through 30 games, Zavala is hitting .413 behind an impressive 1.17 OPS. While the Ducks offense, statistically speaking, is middle of the pack, their pitching has been superb, combining for a 3.41 ERA and a 9.67 strikeout-per-nine rate.

(All records and stats through Sunday, April 18).