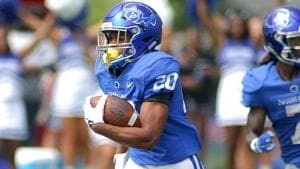 
Two top-25 showdowns and the national runner-up Ferris State Bulldogs open the DII football season on an action-packed Thursday night of games. While we wait for Sept. 5 on the edge of our seats, let’s see if we can predict what will happen by the time the final whistle is blown in McKinney, Texas, at the DII football championship game.

OPENING WEEKEND SCHEDULE: The complete guide to the first weekend of DII football

McLaughlin became the 11th DII football player to rush for more than 2,200 yards in a single-season in 2018 and he did it as a freshman. His 2,421 yards at 6.40 yards per carry set the DII freshman record and there is plenty of reason to think he’s just getting started.

So, how can McLaughlin break Danny Woodhead’s 13-year-old record of 2,756 yards in a season? The simple answer is he doesn’t have to do it alone. Starting quarterback Chris Brimm and the Falcons top receiver Marvelle Ross are back. The two are a tricky combo and, if a team decides to stack the box against McLaughlin, Brimm will pick the defense apart. Throw in Jimmy Burchett and Brandon Nicholson and you have one of the strongest returning offensive lines in DII football. Everything is lined up for another huge season for McLaughlin.

FIRST-TIMERS? Notre Dame and 4 others who can win its first DII football title in 2019

Southern Arkansas enters the 2019 season with the longest current home winning streak. So why is CSU-Pueblo’s streak such a bold prediction?

The ThunderWolves have won 15 straight at the ThunderBowl, one behind the Muleriders’ streak. They open their home slate in Week 3, first welcoming No. 17 Colorado School of Mines before No. 13 Texas A&M-Commerce comes to town. That’s quite the duo CSU-Pueblo has to worry about coming into its home stadium.

Though the ThunderWolves’ defense lost some big names, Kyle Rosenbrock and Jackson Wibbels are two defenders that can control the tempo of the game. If Austin Micci can get the run game going and the defense does its part, CSU-Pueblo will be tough to beat again, especially on its home turf.

3. The MIAA sends three teams to the DII football championship

Sending three teams to the DII football tournament isn’t unheard of. The Lone Star Conference and Gulf South Conference, for example, often stuff the bracket with multiple teams. But that Super Region 3 is a doozy. The GLIAC has Ferris State, Grand Valley State and Ashland as perennial playoff contenders, the GAC seems to send Ouachita Baptist and Harding to the tournament on an annual basis and Indianapolis runs the show in the GLVC.

PRESEASON RANKINGS: What we learned from the first poll of 2019 | Complete AFCA top 25

And of course, the MIAA. The MIAA has two top-11 teams to start 2019. Let’s face reality: a postseason without Northwest Missouri State would just feel weird. There hasn’t been a tournament played without the Bearcats since 2003. Fort Hays State may be ranked lower in the preseason poll, but the Tigers are certainly contenders for the MIAA crown right out of the gate.

But don’t sleep on Pittsburg State. The Gorillas are as strong a sleeper in DII football for 2019 as any, and the beyond-bold prediction would be that Pittsburg State wins the MIAA. The Gorillas have the luxury of hosting Fort Hays State at “The Jungle” and play Northwest Missouri State at Arrowhead Stadium. If they can win just one of those games, Pittsburg State has a real shot at the MIAA crown.

Slippery Rock had a monster 2018 fueled by breakout Delaware transfer Wes Hills at running back. He’s just about the only piece that doesn’t return in 2019.

Quarterback Roland Rivers III didn’t take over as starter until Week 3 and still threw for nearly 3,000 yards and 28 touchdowns while rushing for 597 yards and seven touchdowns as a dangerous dual-threat in the backfield. He’ll have his favorite targets back as well in Henry Litwin and Jermaine Wynn, Jr. who combined for 1,586 yards and 17 touchdowns. Throw in a big returning offensive line, and whoever takes over at lead back should find plenty of openings.

The defense is loaded with returners. Nearly the entire starting 11 is back and should be the real strength. Jake Chapla is as sure-footed as it comes and can turn a game, or save one, himself. But the biggest takeaway from 2018 was The Rock’s performance in the playoffs. They picked up two huge road wins, one at undefeated LIU Post and then again in New Haven. Slippery Rock should have every opportunity to avenge its PSAC Championship loss to West Chester in 2019.

The Panthers open the season outside the top 25, receiving just 21 votes. But this was an 8-2 team a year ago and returns some very nice pieces in a conference that sees plenty of change at the top.

Virginia Union will have a new face under center, but running back Tabyus Taylor — who rushed for over 1,500 yards and 21 touchdowns a year ago — is back to control the tempo. The defense has some exciting pieces. Defensive back Sterling Hammond  (the team leader in interceptions in 2018 ) and returning tackle leader linebacker Taj Conway  are both getting preseason conference recognition.

The problem? We’ll know how accurate this prediction is pretty quickly. The Panthers open Sept. 7 against FCS foe Hampton before hosting 2018 quarterfinalist and No. 8 Lenoir-Rhyne. We’ll find out a lot more about this team after that swing.