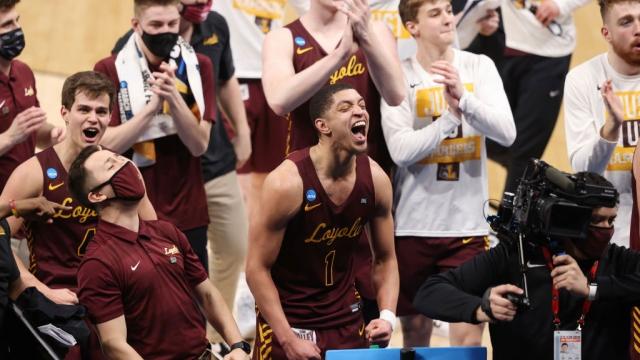 37 numbers to ponder from No. 8 Loyola's takedown of No. 1 Illinois

INDIANAPOLIS — As we all search for potential upsets to predict in our brackets, the speculation focuses on whether the highest-seeded teams will lose before reaching the Final Four. The Ramblers of Loyola Chicago may not have invented the art of defeating a superior seed, but they just might be perfecting it.

Four times during their 2018 run to the Final Four, the 11th-seeded Ramblers defeated a higher-seeded team. Their 71-58 elimination of No. 1-seed Illinois on Sunday sends the No. 8-seeded Ramblers to the Sweet 16 for the fifth time.

Here are some statistics that highlight how the Ramblers got it done and the impact of their achievement:

55.7 – Loyola’s average of points allowed through games of March 19, which ranked first in the NCAA.

17 – Loyola’s ranking in the latest Associated Press poll, released one day after the Ramblers became a No. 8 seed.

2 – Illinois players that have been named All-Americans, Ayo Dosunmu and Kofi Cockburn.

28.8 – 3-point shooting percentage of Loyola opponents in the six games prior to the second round.

28.6 – 3-point shooting percentage of the Illini on Sunday.

1,819, 934, 367 – Number of points, rebounds and assists in Cameron Krutwig’s Loyola career, making him the only Rambler to exceed 1,500 points, 800 rebounds and 300 assists. The point total is fifth most in Loyola history and the rebound total ranks seventh.

He is also one of four players to accomplish this in the Missouri Valley Conference history. The others: Oscar Robertson, Larry Bird and Hersey Hawkins.

4-0 – Record of Loyola opponents when scoring 60-69 points against the Ramblers this season.

17 – Number of Illinois turnovers, one short of the most the Illini have committed this season.

81.3 – Illinois scoring average going into the second round.

0-1 – Illinois record when scoring 59 or fewer points this season.

2-10 – Illinois record when scoring 59 or fewer points in four seasons under Brad Underwood.

42 – Number of consecutive games in which Illinois All-American Ayo Dosunmu scored in double figures, the longest active streak in the NCAA going into the second round.

20.6 – Dosumnu’s scoring average going into the second round.

9 – Number of points scored by Dosunmu vs. Loyola.

0:00 – Amount of time that Illinois held the lead vs. Loyola.

2:20 – Amount of time for Krutwig to make a jumper, deliver a dunk on a pass from Keith Clemons, and make a hook shot for a tone-setting 6-2 Loyola lead at the start of the game.

6 – The smallest Illinois deficit in the second half.

4 – Number of steals by Krutwig (three in the second half.)

15 – Number of Illinois victories in the 16 games prior to the second round.

99 – Loyola victory total since the start of the 2017-18 season, giving the duo of Krutwig and Williamson the most wins over a four-year period at Loyola.

41 – Number of Illinois victories in the NCAA tournament, third most among teams that have not won a national championship, trailing Oklahoma and Purdue at 42.