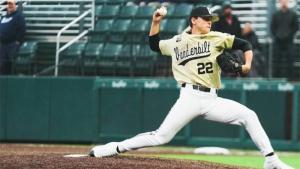 
Stop us if you heard this one. The defending champion Vanderbilt Commodores look like they have another stud freshman pitcher on their hands. The Vandy Boys young righty came out and struck out 12 over five no-hit innings on Tuesday night in a 3-0 victory over South Alabama.

LATEST RANKINGS: Miami (FL) the new No. 1 in college baseball

Last year, of course, Vandy’s freshman Kumar Rocker took the college baseball world by storm with memorable appearance after memorable appearance en route to the 2019 College World Series title. Perhaps that’s what makes this start so promising for the Commodores — and frightening for the SEC — that these two will be together for through 2021.

Now, it’s one start, but it was an impressive one. Here’s what stood out.

That’s impressive right there, especially against a South Alabama lineup that were the favorites to win the Sunbelt Conference this year in the preseason. Leiter came out firing, striking out the side in the first, freezing each batter looking at strike three.

Per our friends at D1Baseball.com, Leiter was sharp. He had three pitches working, “sitting 92-95 mph with his fastball, while also showing a filthy 78-82 mph slider and a nasty 74-75 mph curveball.” Filthy and nasty are words you like to see early in the season, especially when it is describing a freshman and his secondaries.

Right now, Leiter looks like he’s midweek starter. But should he keep rolling, a Mason Hickman, Rocker, Leiter weekend rotation could be the best in the nation.

Leiter leaves the game with a no-hitter in tact

The 12 strikeouts are impressive, but how about the fearless attack of the Jaguars lineup? He struck out the side in order three times in the first, third and his fifth and final inning, and despite reaching a full count several times, he walked one Jaguar and it wasn’t until the 11th batter he faced.

Let’s not forget, last year’s freshman sensation didn’t get off to the same start. Rocker allowed five runs in his college baseball debut, but by May he was settled in. As Leiter opened the 2020 season at Hawkins Field in Nashville, Tennessee, on Tuesday, let’s not forget how Rocker closed it. That would be a 19-strikeout, no-hitter of Duke in the Super Regionals to help the Vandy Boys get to Omaha. That’s a pretty wild run right there.

As we said, Leiter exited the game with a no-hitter in tact, striking out 12. By the time the game was over, the Jaguars struck out 19 total times, registering a mere two hits and reaching base a whopping three times. That’s thanks to the late-innings work from fellow freshman Thomas Schultz.

PREDICTIONS: The NCAA.com 8 for Omaha, predicted

Schultz, a 6’6, 215 pounds righty, came out of the pen to pitch the final four innings and pick up his first career save in the process. He struck out seven Jaguars while allowing their only two hits, but he didn’t walk a single batter. In fact like his starter Leiter, Schultz struck out the side in his college baseball debut.

This is what makes Vanderbilt so dangerous year in and year out. Despite losing veteran presences like Patrick Raby and Drake Fellows that played such a prominent role in the run to the CWS, there is someone else waiting in the wings. You can be sure all eyes will be on Leiter for his next — and probably every — start of the season.