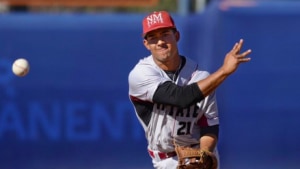 
The Harwich Mariners and Cotuit Kettleers are the final two teams standing in the Cape Cod Baseball League. The two teams begin the three-game series for the 2019 CCBL championship Thursday night at 6:30 p.m. ET at Whitehouse Field in Harwich.

Before the series starts, let’s take a look at how we got here and some college baseball players to keep tabs on this weekend on the Cape.

Cotuit vs. Harwich: How we got to the championship series

Cotuit is no stranger to the CCBL championship, winner of an unprecedented 16 titles. Harwich, not so much, have won three Cape Cod Baseball League championships and is making its first championship appearance since 2011.

You could argue that neither team was the one expected to be here. When July began, Harwich was dead last in the East Division, sitting at 11-13. The Mariners finished the season on a 10-8 run, but more importantly, were a perfect 4-0 in the CCBL playoffs. Like Harwich, Cotuit finished the season a mere .500 team with a 20-20 record. The record that matters most is the 4-1 mark the Kettleers posted in the playoffs so far.

CCBL championship series: A battle of hitting and pitching leaders

There’s no questioning that Harwich’s bread and butter comes on the bump. The Mariners were second in the CCBL in ERA with an impressive 3.40 mark while leading all teams with a 1.22 WHIP. That’s quite the contrast to Cotuit, who finished in the bottom three in both categories with a 4.12 ERA and a 1.46 WHIP.

Where the Kettleers will get you is at the plate. Their .733 OPS was second to none, while they also led the league in total bases (544). Harwich was the opposite end of the spectrum, posting the second-lowest OPS in the CCBL at .659 with just 457 total bases behind a .237 team batting average during the regular season.

Players who could impact the CCBL championship

Cotuit trailed 3-2 in the seventh inning of the West Division finals when Nick Gonzales, the star second baseman out of New Mexico State, came to the plate. He launched a two-run bomb that put the Kettleers ahead for good.

That’s what Gonzales has done all year, earning him the 2019 CCBL MVP honors. For the regular season, he hit .351 with a league-best 54 hits and 14 doubles, seven home runs, and 33 RBI, all of which were top 3 marks. He already has nine hits in Cotuit’s five playoff games.

He’s not alone in that lineup, however. Coastal Carolina’s Parker Chavers also had a big regular season, hitting .270 with five home runs and 18 RBI, and is grooving in the postseason. He has seven hits in the first five games and four are extra-base hits — two doubles and two home runs — for the juggernaut offense of the Kettleers.

Hal Hughes out of LSU has been red-hot for the Mariners in the postseason. He’s hitting .455 with a big home run in the East Division clincher against Yarmouth-Dennis. He began the postseason with a 3-for-3 performance and looks to keep rolling. It’s pretty remarkable considering he hit just .170 during the CCBL regular season.

Dylan Neuse, fresh off another trip to the College World Series with Texas Tech, has also been hot for the Mariners. Another Harwich hitter who struggled to just a .197 average in the CCBL regular season, Neuse has five hits and two RBI in his first four playoff games.

Another hitter to keep an eye on at the plate for Harwich is Notre Dame’s Niko Kavadas. He tied for the CCBL lead in home runs this season and is hitless thus far in the playoffs. His bat seems itching to come alive.

On the bump, Harwich — as it was all season — has been tough. Three of the Mariners four starters — Kansas State’s Connor McCullough, Wake Forest’s Antonio Menendez, and Stanford’s Jacob Palisch — all went six innings in their respective starts, combining to allow one earned run and strike out 18. On the flip side, West Virginia’s Jackson Wolf — one of Cotuit’s star pitchers — has been ice cold, making two starts this postseason and allowing nine earned runs, unable to escape the first inning in either start. The Kettleers hope Cal’s Sean Sullivan continues his breakout summer, after going five strong shutout innings in his postseason debut, striking out six and walking none. The righty finished the regular season with a dazzling 1.96 ERA over eight starts.