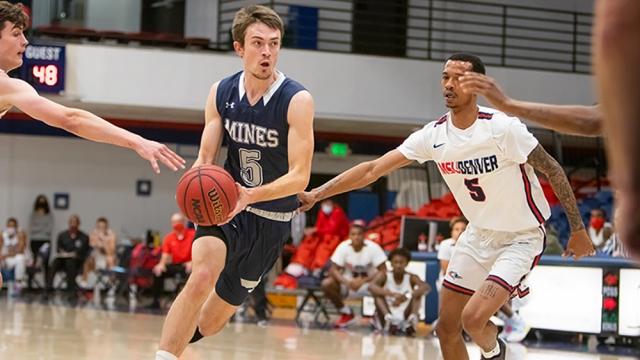 There’ll be no shortage of fire power on display in DII men’s college basketball this weekend. Not only will the No. 1 team return for the first time in nearly a month, but the country’s top offense will battle one of the sport’s most efficient scorers.

Here are three games to watch:

Records and statistics are through Jan. 28.

The Griffons have lost their last two games after upsetting then-No. 5 Washburn back on Jan. 9. They’re in the middle of a four-game road trip that culminates on Feb. 6 against No. 3 Northwest Missouri State. But before they can begin thinking about the Bearcats, they’ll need to prepare for the team that nearly upset the third-ranked program.

Lincoln (MO) gave Northwest Missouri State all it could handle on Thursday night. The Bearcats survived, 76-74, but the Blue Tigers showed they can hang with the best. That’s especially true for a team that has three players averaging at least 17 points per game. In fact, their scoring averages are almost identical.

Quinton Drayton leads the team with 17.8, followed by Derrick Woods at 17.3 and Sai Witt is averaging an even 17. Even after those three, Lincoln (MO) has two more players averaging double figures in scoring: Cameron Potts (10.7) and Yaniel Vidal (10.2). It’s hard to game plan for a group that doesn’t rely on one or two guys to generate offense.

Fortunately for the Griffons, they have six players scoring more than 10 points per game. They’re led by Tyrell Carroll’s 17.6 points on 45.3 percent shooting. No. 23 Missouri Western averages 82.7 points as a team, but has failed to reach 70 in each of its last two games. That’ll have to change against the Blue Tigers.

After a 4-0 start and No. 4 ranking, West Liberty has now lost two straight and dropped to No. 9 in the latest NABC Coaches poll. The Hilltoppers will try to bounce back when they visit Charleston (WV) on Saturday. And they’re bringing the nation’s top scoring offense with them.

West Liberty is averaging an even 105 points per game this season. No other team is currently scoring more than 100, on average. Both members of the Hilltoppers’ starting backcourt average north of 20 points per game. Pat Robinson III leads the team at 22.3, while Dalton Bolon isn’t far behind at 20.7. The duo is responsible for 40.9 percent of West Liberty’s offense.

To keep pace with such a juggernaut, the Golden Eagles’ balanced scoring attack will need to be at its best. Charleston (WV) has five players averaging double figures in scoring, led by bruising forward LaMont McManus’ 14.1 points per game on 63.1 percent shooting. He’s a microcosm of a Golden Eagles club that’s shooting 50.8 percent from the floor. They’re one of 13 teams in DII to have a field-goal percentage above 50.

It’s still too early to declare this a “must-win” for the Hilltoppers. But a third-straight loss would surely knock them down in next week’s rankings, if not out entirely.

On Saturday, the Orediggers will play their first game since Jan. 4. For all that’s changed in the last 25 days, the No. 1 ranking has remained with Colorado School of Mines. Still, there’s little room for error.

No. 2 Northern State and No. 3 Northwest Missouri State haven’t missed a beat during Mines’ absence. Unless all three go undefeated this weekend, which is certainly possible, there’s a good chance we’ll see some movement atop Tuesday’s NABC poll.

But enough about hypotheticals. Mines and Adams State enter this contest neck-and-neck in terms of team field-goal percentage. The Orediggers are shooting 50.8 percent from the floor this season, which ranks 10th in DII. Right after them are the Grizzlies at 50.7 percent.

The difference will likely come on the defensive end, where Mines is holding opponents to just 59.6 points per game. Only No. 10 Mercyhurst is allowing fewer in DII at 53.2.

To its credit, Adams State’s scoring average of 84.6 ranks 14th in the country. Three Grizzlies are averaging more than 15 points per game. That group includes Destan Williams, who leads the team with 20.3 points per game on 51.5 percent shooting.

Will an almost four-week layoff negatively affect Mines? Or will it continue to roll? We’ll soon find out.