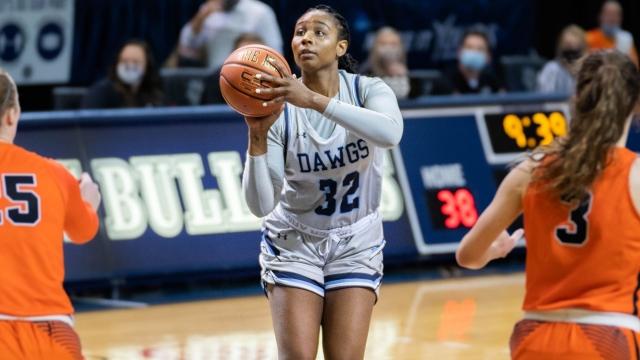 It’s already been a busy week in DII women’s basketball. But we’re not done yet. The weekend is here, and NCAA.com has three games that you can’t afford to miss.

Records and statistics are through Feb. 4.

This will be the third of four meetings between the Bulldogs and Tigers this season. Southwestern Oklahoma State won the first, 92-77, on Jan. 7 in what was each team’s season opener. East Central won the second, 85-75, on Jan. 23. That remains the Bulldogs’ only loss. Now it’s time for round three.

THE DII REPORT: The latest men’s basketball Power 10 rankings and the return of baseball and softball

East Central doesn’t have the same fire power offensively, but its defense has the upper hand. The Tigers are limiting opponents to just 59 points per game on 37.3 percent shooting this season. They’ve held teams to under 70 points in seven of their eight wins. The lone exception was the aforementioned victory over the Bulldogs.

Rockhurst, you have our attention. The Hawks snapped No. 1 Drury’s 42-game winning streak on Tuesday, 75-69. It was the Panthers’ first loss since March 27, 2019. After that emotional night, Rockhurst fell to McKendree, 62-55, on Thursday. But Rockhurst has a chance to rebound and pull off another upset when it hosts No. 23 Southern Indiana on Saturday.

These teams met in the season opener back on Nov. 27. The Screaming Eagles won 70-55 behind Emma DeHart’s 23 points, five rebounds and one steal. The Hawks struggled offensively and shot just 26.1 percent (18-of-69) from the floor. That likely won’t happen again, as their current field-goal percentage is just under 40 percent.

Obviously, the stakes in February are much higher than they were in November. The Screaming Eagles look to end a three-game losing streak and remain in the WBCA poll. For the Hawks, a win would give them two victories over ranked teams in less than a week. But a loss would put them right at .500 with seven games remaining.

Emmanuel (GA) is one of the more fundamentally sound teams in the country. The Lions rank fifth in field-goal percentage at 47.6 and commit the second-fewest personal fouls per game at 11.6. Defending without fouling is an art, and their ability to do so is one of the reasons why they’re holding teams to an even 61 points per game.

But that defense will face its biggest challenge yet when Barton comes to town, as the Bulldogs average 79.9 points per game. They’re led by a double-double machine in senior center Shanika Peterkin, who is averaging 17.3 points and 11.5 rebounds per game. Barton also moves the ball extremely well, ranking sixth in assists per game with 18.8.

If the Bulldogs can utilize ball movement to get the Lions out of position, they could force them to play defense with their hands rather than their feet. That would lead to Barton drawing more fouls, or better yet, an open lane to the basket. Otherwise, Emmanuel’s stifling defense could snap Barton’s five-game winning streak.