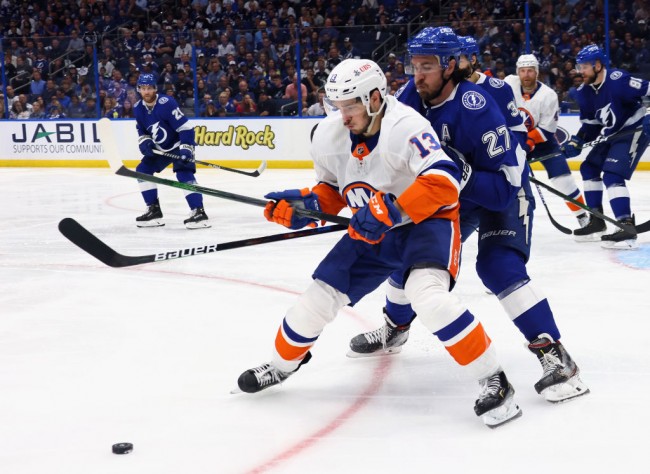 TAMPA, FLORIDA – JUNE 13: Mathew Barzal #13 of the New York Islanders skates against the Tampa Bay Lightning in Game One of the Stanley Cup Semifinals during the 2021 Stanley Cup Playoffs at the Amalie Arena on June 13, 2021 in Tampa, Florida. The Islanders defeated the Lightning 2-1. (Photo : Bruce Bennett/Getty Images)

The New York Islanders moved one step closer to their first Stanley Cup Finals appearance in more than 35 years after recording an impressive 2-1 victory over the Tampa Bay Lightning in Game 1 of their best-of-seven series on Sunday.

It was an impressive performance by the Islanders, who stretched their unbeaten run in the postseason to four games.

Leading the way for New York in Game 1 was goalkeeper Semyon Varlamov. He kept in check the vaunted Tampa Bay offense, stopping 30 of the 31 shots the Lightning unleashed on his goal.

Such was Varlamov’s stellar defensive display that the only goal Tampa Bay scored in this contest came with less than a minute remaining in regulation.

Varlamov has now won his fourth consecutive playoff start dating back to the series win against the Bruins. He joins teammate Ilya Sorokin as only the third pair of goalies from the same team to have personal winning streaks of at least four games during the same postseason. Sorokin won four straight games during the Islanders’ first-round victory against the Pittsburgh Penguins.

However, what proved to be the difference in Game 1 was the Islanders’ discipline as they limited Tampa Bay’s power-play opportunities throughout the contest.

They held Tampa Bay to just two power-play chances – the last coming with 1:38 remaining, which produced the Lightning’s only goal. Brock Nelson drew a penalty for high-sticking, and Tampa Bay took advantage with Braden Point scoring his ninth goal of the postseason on a 6-on-4 opportunity with 53 seconds to go.

Playing 5-on-5 gives New York the best chance of upsetting the reigning Stanley Cup champions, and their performance in Game 1 validates that game plan with the Islanders’ Mathew Barzal and Ryan Pulock managing to score goals in that set-up.

The Islanders know fully well that Tampa Bay thrives on those power-play chances, as evidenced by the Lightning’s showing in their previous series against the Hurricanes, wherein they went 7-for-16 (43.8 percent) with the man advantage.

On the other hand, the Islanders had trouble stopping power play opportunities, going 7-of-14 (50%) on the penalty kill in their series against the Bruins.

After opening the postseason with no goals in eight games, recording just three assists during that stretch, Barzal has managed to emerge from his scoring slump, now racking up four goals in the last five games. Apart from the four goals he has scored, Barzal has also recorded seven total points in his past six games.

It’s back to the drawing board for the Lightning, who are in unchartered territory in this series. It is the first time that the Lightning has suffered a Game 1 defeat in this postseason.

The last time they faced New York in the bubble playoffs in Edmonton, Tampa Bay stormed to a quick 2-0 series lead, outscoring the Islanders by a 10-3 margin through the first two games. So for them to trail in this series is a different challenge altogether for the Lightning.

One thing that Tampa Bay needs to do in Game 2 is to limit giveaways. The Lightning failed to protect the puck against the Islanders in Game 1, recording seven giveaways, including one by Steven Stamkos that led to Barzal’s opener.

On the other hand, New York had only one giveaway, which proved to be the difference in the match.