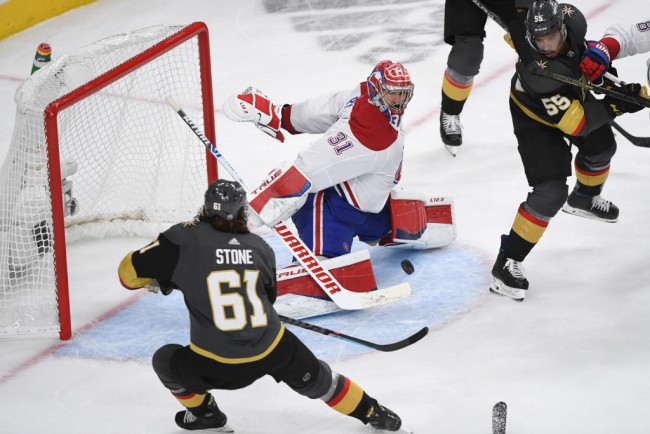 The Montreal Canadiens knotted their series with the Vegas Golden Knights after a thrilling 3-2 victory at T-Mobile Arena on Wednesday night. Tyler Toffoli, Joel Armia and Paul Byron scored for the red-hot Canadiens, who have now won eight of their last nine outings. The series now shifts to Montreal for Game 3 with the series all tied at one game apiece.

After absorbing a one-sided loss in the series opener, the Canadiens made it a point to start strongly in Game 2. That they absolutely did, scoring two quick goals in the opening period to take immediate control of proceedings.

Armia gave Montreal a 1-0 advantage at 6:12 of the first period after crunching Vegas defenseman Alec Martinez into the end boards behind Fleury. That allowed Corey Perry to gather the puck and deliver a pass to Joel Edmundson in the right circle. Edmundson’s shot attempt then deflected off the skate of Golden Knights forward William Carrier with the puck going to Armia whose ensuing shot attempt went past the outstretched pad of Vegas keeper Marc Andre Fleury

The Canadiens then doubled their advantage at the 16:30 mark of the first period with Toffoli the goal-scorer. He snapped a shot through Fleury’s pads to not only push Montreal’s lead to 2-0, but extend the Canadiens’ first-period scoring edge in this postseason to 12-3. Toffoli has been on fire for Montreal of late, scoring 10 points (five goals, five assists) during an eight-game point streak, which is one shy of tying Guy Lafleur (1977) and Larry Robinson (1978) for the longest in Montreal’s storied playoff history.

Vegas had plenty of opportunities to slice the deficit in the second period but the Golden Knights wasted some glorious chances. Max Pacioretty’s breakaway shot hit the bottom of the right post at 3:22 and Martinez unluckily broke his stick while teeing off on a shot to Carey Price’s left during a power play chance. Byron then made it 3-0 for Montreal at 17:45 of the second period with a backhand shot on a breakaway.

The Golden Knights didn’t roll over and die, though, as they launched a furious fightback in the closing stages of Game 2 with Alex Pietrangelo providing the much-needed offense for Vegas. He cut the deficit to 3-1 at 18:46 when his shot from the right point made it through traffic following a face-off win by Keegan Kolesar. Pietrangelo then got Vegas to within 3-2 at 14:46 of the third period with a shot that went through the legs of Jeff Petry and just under Price’s glove.

There will be no more goals, though, as Price buckled down to work in the dying minutes. He finished the game with 29 saves for the Canadiens who finally snapped the Golden Knights’ five game winning streak in the postseason.