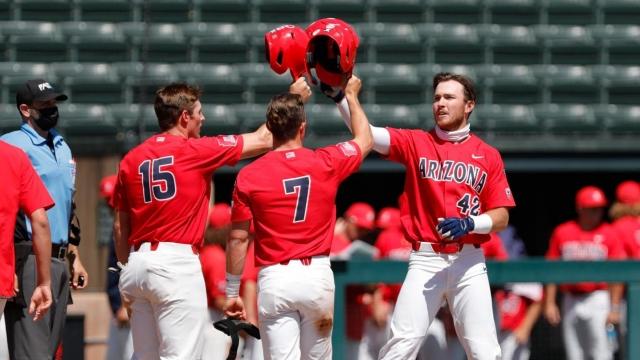 Not only has Campbell thrown a no-hitter this season, the two-way player is also a threat to step into the battter’s box and drive the ball out of the yard.

CES leads the nation with 66 runs batted in while hitting .362. He’s top 10 in the nation in total bases after notching 35 extra-base hits, including 15 home runs — tied for most in the regional.

Williams gives the Wildcats a big advantage with his familiarity and experience playing at Hi-Corbett Field and his ability to go get flies from gap to gap. He gets terrific reads off the bat and seems to make a spectacular play nearly every time we see him. He could also get serious consideration for most exciting player with his elite leadoff skills.

McGreevy has been climbing up draft boards throughout the spring. He has been devastating on right-handed hitters because his 84-85 slider tunnels perfectly off a 90-95 fastball. He also has a changeup and curveball that help him get out lefties. While he doesn’t have the no-hitter that Campbell tossed, McGreevy does have three starts with double-digit strikeouts and no walks, including a three-hit shutout of Hawaii and a 15-strikeout, two-hit effort against Cal Poly.

The Gauchos got their cleanup hitter back the final weekend of the regular season and he immediately started clubbing balls around the yard, notching hits in all four games with a pair of homers during a weekend sweep. Castanon changes the complexion of the UCSB lineup and gives Andrew Checketts more options to mix and match with another infielder that can play all four positions, if needed.

The Gauchos will have a first-round pick (McGreevy) starting in their regional opener and the Big West Pitcher of the Year (Rodney Boone) ready in Game 2. The third-year sophomore duo is a combined 19-5, 2.57 this season and 36-7, 2.39 in their careers.

The Wildcats have multiple options late in games and are willing to mix up who they using based on matchups. They have five different pitchers that have collected saves led by fifth-year senior righthander Vince Vannelle, who has seven this season and is eighth on the school career saves list. They have options from the left side with Gil Luna and Randy Abshier, but their most dominant reliever has been righthander Preston Price (1-1, 2.41, 3 SV). The fifth-year senior has struck out 32 and allowed 11 hits in 18.2 innings.

The Wildcats average 8.7 runs per game. They lead the nation in hits and are second in runs, on-base percentage and triples. They are also in the top 10 nationally in several other offensive categories: batting average, slugging percentage, base on balls, doubles, and sacrifice flies. And they are playing at home in an offensive ballpark that suits their lineup.

Defense could end up being a deciding factor if one team can rise above the others, since each of the teams has some defensive deficiencies. The Gauchos had the best fielding percentage among the group and the late-season return of McClain O’Connor to their middle infield only makes them stronger.

Tucson is the toughest regional in the field. Home field advantage could play a big part with Hi-Corbett Field playing much different than most fields with a massive amount of ground to cover between the gaps. That’s why the Wildcats are still the favorites, but it wouldn’t be surprising to see any of the teams come out of this regional. We’d put the percentages at 40, 25, 25 and 10 by seed.