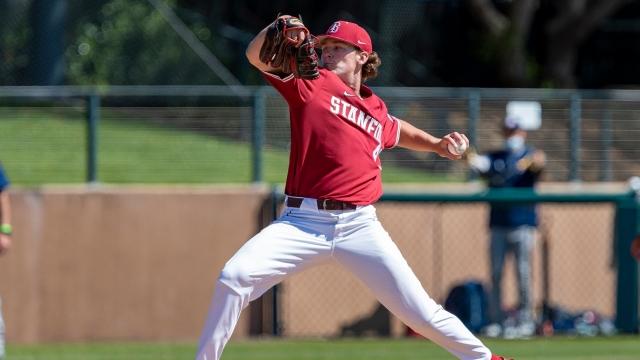 Not only does the starting shortstop have a batting average of .391 (30th nationally), but he is also a pressure-cooker on the base paths with a very effective 18-for-20 in the stolen bases department and is the infield leader of the Bison defense.

When you lead the nation with a rousing .479 average, you get this slot in our Regional preview. Shrum also has hit 15 yard calls, which leads the field here in Palo Alto. By the way, Shrum has committed just one error at first base this season.

When head coach T.J. Bruce moved Bosetti from second base to the hot corner and offensively put him at the top of the batting order, the Wolf Pack took off. Bosetti has committed just six errors all season. Oh by the way, Bosetti also set an NCAA record earlier this season by homering in nine straight games.

With Trenton Denholm having a *meh* year by his own standards, Beck is the lone dominant Friday ace for this Regional field, dare I say. He’s gone 7-1, 3.03 with two complete games (the nine inning variety) and has 106 Ks with just 20 walks. Oh and opponents are hitting a wimpy .188 off of him.

Other than Beck, Stanford’s starting pitching has been a rollercoaster. As we’ll discuss below, UCI starters Trenton Denholm and Peter Van Loon have not had top 10-round draftee seasons, Nevada only has one starter below 5.00 and NDSU’s bullpen is way better than its starters. So keep those things in mind as we get into Saturday and Sunday games.

As you just saw a section above, winning this accolade isn’t the bees knees. But despite Denholm and Van Loon not being as dominant, Anteater fans can be happy that Michael Frias (8-1, 3.30) and Nick Pinto (7-3, 3.33) have exceeded expectations. This postseason is where the four-game Big West weekends comes in handy for that pitching staff.

There is plenty of good bullpen arms to go around in this Regional, but the Cardinal have Zach Grech, who is second in D1 with 13 saves on the season, and Joey Dixon who is holding opposing bats to a .168 average in his 20 appearances this season. In all, the Trees have five bullpenners with a 3.80 ERA or lower.

Sporting a hearty .321 team average, good for fifth nationally, this one is a no-brainer. Maybe it’s the thin mountain air but when you have wicked-sticks like Dillan Shrum, who leads the nation at .479, and Dario Gomez, who is 16th in the country at .404, that’s a pair of formidable hitters. Three players have double-digit home run totals in Shrum (15), Tyler Bosetti (11) and Joshua Zamora (12).

This is essentially splitting hairs because the Cardinal have a fielding percentage of .980, which is tied for 10th nationally, Nevada is at .978 and UCI is at .978. So this will be one of the better defended Regionals of the 16 spread around the country.