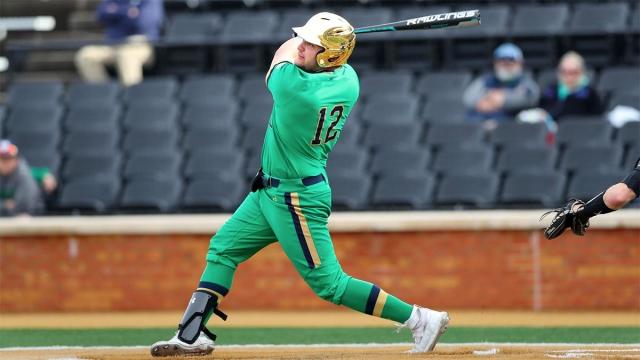 Notre Dame enjoyed an incredible season with numerous exciting, come-from behind victories during the first full season under the helm of Head Coach Link Jarrett. Once thought to be a lock for a top-eight national seed, the Irish had to settle for the 10th-best hosting seed and will host three dangerous clubs.

Most Exciting Player: Niko Kavadas, 1B, Notre Dame. When Kavadas steps to the plate a hush oftens falls upon the crowd as he’s a threat to leave the ballpark each and every time the bat leaves his shoulder. He has 16 dingers this year and a .691 slugging percentage while also showing a keen eye at the plate.

Best Hitter: Kyler Fedko, OF, Connecticut. Fedko was named the Big East Player of the Year after slashing .411/.495/.697 with 27 extra-base hits, 12 of which were home runs. He sparked the offense during the Big East Tournament, batting .500 (8-for-16) in four games, scoring five times and driving in seven.

Best Defensive Player: Zack Prajzner, SS, Notre Dame. Prajzner is the captain on the nation’s best defense, committing just five errors at shortstop in 41 games. With smooth lateral actions and sure hands, he sets the tone up the middle of the field for a team that rarely beats itself.

Best Pitcher: Andrew Taylor, RHP, Central Michigan. A second-year freshman, Taylor is a name to watch for the 2022 draft thanks to his still-projectable 6-foot-5, 190-pound frame and low-90s stuff. His most recent start – a one-hit, complete game shutout with 10 punchouts against Toledo on Saturday – was the best of his career so far as he’s 11-3, 1.21 on the year with 120 strikeouts in 89 1/3 innings.

X-Factor: Tanner Kohlhepp, RHP, Notre Dame. Kohlhepp is Notre Dame’s version of Kevin Kopps, a bullpen ace that comes into games during high leverage situations, regardless of the inning, and can go several frames at a time. He’s 7-1, 2.88 this year and has allowed just 38 hits in 56 1/3 innings thanks to low- to mid-90s heat, a sharp slider and a lower, slinging arm slot that makes him that much more difficult to hit.

Best Starting Rotation: Michigan. Lefthander Steve Hajjar and righthander Cameron Weston formed quite the 1-2 punch and made beating Michigan in a three-game weekend series a difficult task all season long. Each threw over 75 innings and combined to go 11-4, 2.62. Jacob Denner received the lion’s share of the team’s Sunday starts while fellow lefthander Ben Dragani and righthander Blake Beers also made a handful of starts during the season giving the team enviable depth. This is a very close category as UConn (Austin Peterson and Ben Casparius) and Central Michigan (Taylor and Jordan Patty) each have dominant 1-2 starting punches of their own.

Best Bullpen: Michigan. Michigan’s pitching depth continues to its bullpen for a staff that has a 3.93 cumulative ERA, and there’s a nice balance of righthanders (Isaiah Paige, Willie Weiss, Will Proctor, Joe Pace) and lefthanders (Jack White, Logan Wood). Weiss is the closer thanks to a mid-90s fastball and vicious slider. Whoever doesn’t start of Denner, Dragani and Beers adds further depth with the ability to be stretched out.

Best Offensive Team: Connecticut. It seemed as though UConn was just hitting its stride as the regular season came to a close, scoring 10 or more runs in its last five games. While Kyler Fedko is the star at the top of the order, his brother Christian more than holds his own. There’s also a pair of Winkel brothers, Pat and Chris, each of whom hit 11 dingers. Star second-year freshman Reggie Crawford also hit 11 bombs and led the team in RBIs with 56. Add in a .337/.420/.503 season from Erik Stock, and there’s no easy out, one through nine, in this lineup.

Best Defensive Team: Notre Dame. The Fighting Irish lead the nation in fielding percentage with a stellar .985 mark. Prajzner and Jared Miller form a steady-handed double-play combination up the middle of the infield as the two combined to commit just six errors on the year. Center fielder Spencer Myers has only two errors in his entire collegiate career and David LaManna is a rock behind home plate who helps neutralize the opposing running game. Brooks Coetzee has a strong, accurate arm in right field and Jack Brannigan has a cannon at third.

No. 1 Seed Win Probability (1-10): 6. Without a doubt Notre Dame received a tough draw and it’s hard not to play the woulda/coulda/shoulda game had it received a higher hosting seed. There aren’t too many teams as hot as UConn right now, and the Huskies might just be the most balanced team in this regional with a powerful lineup and a proven staff. Although it appeared as though Michigan’s offense fell asleep over the last two weeks of the year, the Wolverines still have a strong club from top to bottom. As for the Chippewas, looking past all of the other pieces they have, they’ll be running out Andrew Taylor to face Notre Dame on Friday. That said, the luck of the Irish is alive and well and they have stepped up to every challenge they faced this year and came out on top of the topsy-turvy ACC.