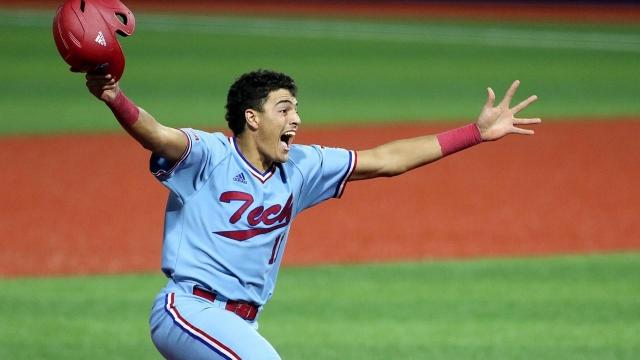 Tyler McDonough is a versatile player who led the Wolfpack in home runs while also patrolling center field. He made just one error all year in 110 chances while getting in a hit in 39 of his 47 games started. Hitting in the two-hole, McDonough leads NC State in runs scored, at-bats, hits, doubles, home runs, base on balls, and also has a dozen stolen bases.

Butler hits three-hole for the potent Wolfpack lineup and led the ACC in batting by 18 comfortable points. His 41 RBIs lead the team, and he also chips in with 11 doubles and 14 stolen bags. A consistent hitter with good bat speed and contact, Butler is a big reason NC State led the ACC in batting.

Young is the C-USA Defensive Player of the Year, playing a nearly flawless second base. Speedy and steady, Taylor makes the plays on the balls he gets to, which is often the drawback with fielders who show good range. In 252 chances, Taylor has committed only one error for a .996 fielding percentage.

An all-Conference USA selection, logged 92.1 innings with only 74 hits allowed. He fanned 81 and walked 22. The redshirt junior is a 6-foot-3, 240-pounder from Shreveport who threw a one-hit, complete-game shutout versus Tulane in March and followed with a four-hit complete-game shutout of Rice in April.

Lee gives Alabama a leg-up late in games. A sidewinder with velocity, he’s a tough look for opposing hitters evidenced by only 28 hits allowed in his 37.1 innings. He’s also struck out 47 and walked 10. He’s a multiple-inning, multiple-day reliever who can shorten a game. In Bama’s SEC Tournament win against Tennessee,  one of the best offenses in the sport, Lee worked 4.2 scoreless innings until his offense could muster the winning run.

The Wolfpack’s rotation isn’t high-end compared to some in the country, but its three starters have been consistent and durable. Reid Johnston, Sam Highfill, and Matt Willadsen have combined for 33 starts as the season has progressed, and gone deep enough in games to help bridge the gap to closer Evan Justice.

The three top teams in this all have an argument here but we’ll go with Louisiana Tech because of its dual closers. Kyle Crigger and Landon Tomkins each have five saves and while neither have the statistics of Lee or Justice, there are two of them which certainly helps in a tournament format.

You have two of the best offensive teams in the country here. NC State led the ACC in batting. Louisiana Tech was second in Conference USA, but at .308 would have led most leagues. NC State slugged 76 home runs while the Bulldogs hit 64. If you factor in the depth of the ACC pitching, there’s a shaky nod to NC State here, but Louisiana Tech’s offense is formidable.

The Wolfpack fields at .983 which was second in the ACC and easily the tops in this quartet of teams.

Louisiana Tech has the best starting pitcher and arguably the best offense. The Bulldogs also should have a raucous home crowd as they host their first regional. NC State has been one of the better teams in the country during the last half of the season. If anyone can match offense with the Bulldogs, NC State is a team that can. And Alabama, despite its inconsistency and injury woes, won’t be intimidated after facing the seven regional host teams already this year. If Alabama gets good starting pitching with Lee looming at the end, it can absolutely wreck this regional. There’s a balance here, especially between the top two clubs, and it shapes up as a competitive weekend that should go down to the final game.