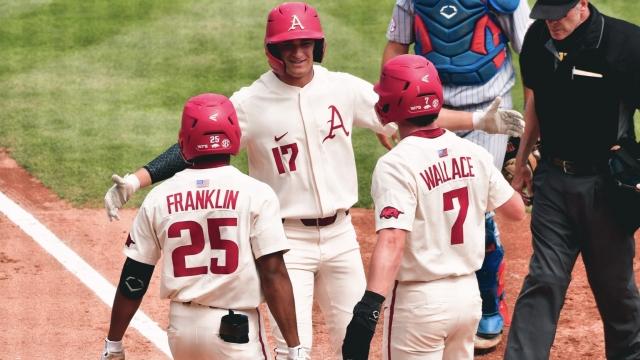 Most Exciting Player: Robert Moore, aka Bob Moore
Moore, a second-year freshman, is having an incredible season for the Hogs and he can do it all. In addition to being a premier defender for the Hogs with his acrobatic plays and throws and his silky smooth defense, he’s Captain Clutch at the plate and can hit for some serious power. More often than not, when Moore goes to the plate with something on the line, he delivers for Dave Van Horn’s club. And for that, he’s their most exciting player.

Best Hitter: Christian Franklin, Arkansas
Cayden Wallace and Cullen Smith certainly could lay claim to being the best hitter in this regional, but we’re giving the nod to the power-hitting Franklin with Brady Slavens likely on the shelf this weekend because of an ankle injury sustained in the SEC tournament. Franklin has some swing and miss in his bat, but he hits for serious power and has game-changing abilities anytime he steps to the plate.

Best Defensive Player: Jalen Battles, Arkansas
The Hogs have the nation’s premier double play duo in Bob Moore and Battles. Battles is a very instinctual defender who has a natural knack for making plays — both easy and difficult. In addition to his outstanding instincts and defensive skills, the veteran Arkansas shortstop also has a strong, accurate arm to first base and makes quick turns on double plays. Both he and Moore are terrific defenders, while the same goes for Arkansas catcher Casey Opitz.

Best Pitcher: Kevin Kopps, Arkansas
I mean, who else but Mr. Automatic out of the bullpen for the Razorbacks? The SEC Pitcher of the Year has had a terrific season, and that’s expected to continue in the postseason with a .161 OBA and an 0.81 ERA in 66.1 innings. If the Hogs can turn the game over to Kopps with a lead late, it’s game over for any opponent.

X-Factor: Patrick Wicklander, Arkansas
The only way the Hogs get derailed in this regional is if their starting pitching falters with lefthander Wicklander leading the way. The talented lefthander was terrific down the stretch in the Southeastern Conference. However, he struggled last week against Vanderbilt and had a limited start. Perhaps that limited start will pay dividends as postseason play begins this weekend. Wicklander has a 2.19 ERA in 65.2 innings of work, along with 72 strikeouts and 20 walks.

Best Starting Rotation: Arkansas
This was a tough category for me to choose with the Hogs having some issues on the injury front the past couple of weeks with righthander Peyton Palette being out for the season. Plus, Nebraska has a solid staff ace in Cade Povich and Northeastern has a good one at the front-end in Cam Schlittler.

Best Bullpen: Arkansas
With the best closer, and maybe the best pitcher, in college baseball at your disposal, it’s impossible to not go with the Razorbacks in this category. Kopps a deal closer at the end of games, while the Hogs have plenty of other high quality options, including Caden Monke and Ryan Costeiu, along with Heston Tole, who actually gave the Hogs a quality outing out of the pen at the SEC tournament. Zeb Vermillion is another solid weapon, though his status is uncertain after dealing with recurring bicep cramps during his outing against Tennessee this past weekend.

Best Offensive Team: Arkansas
It might seem like a broken record at this point, but yep, gotta go with Arkansas here. The Hogs have the nation’s deepest offensive lineup, and that’s even with Slavens out with an injury for another week or two. The Hogs have a plethora of power and have a terrific offensive approach. The batting averages for most of the teams in this field, especially Arkansas and Nebraska, are very deceiving.

Best Defensive Team: Arkansas
One beautiful thing about this regional is that good defense will be played all around. Nebraska and Arkansas rank in the top 10 nationally in terms of fielding percentage, while the Huskies aren’t far behind at 14 overall. Of course, NJIT is the exception with a 238 national rank. It’s hard not to pick Nebraska here, but it’s impossible to not go with the Hogs with the nation’s premier double play duo up the middle in Battles and Moore, along with a premium defensive catcher like Opitz behind the plate.

We’re not going to give the Razorbacks a perfect 10 in this regional, but they’re pretty close. The Hogs have a potent offensive lineup, a terrific defensive club and a pitching staff loaded with powerful arms. They also have a massive home-field advantage at Baum Stadium. It would be a huge shock if the Hogs don’t advance out of this regional.