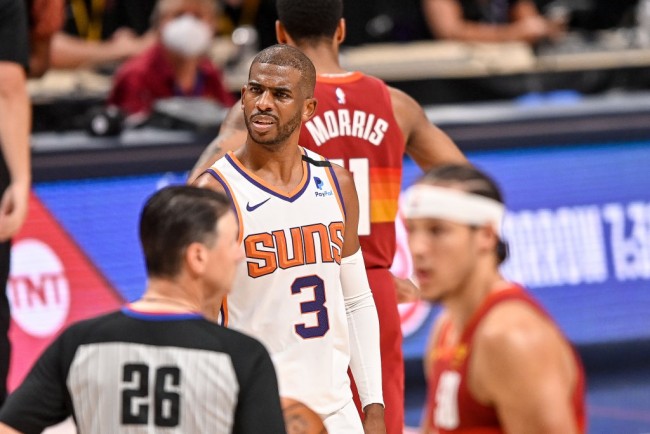 DENVER, CO – JUNE 13: Chris Paul #3 of the Phoenix Suns looks on after a play against the Denver Nuggets in Game Four of the Western Conference second-round playoff series at Ball Arena on June 13, 2021 in Denver, Colorado. (Photo : Dustin Bradford/Getty Images)

The Phoenix Suns and the Los Angeles Clippers will resume their Western Conference Finals clash on Tuesday without a superstar, as Chris Paul and Kawhi Leonard were both ruled out for Game 2 of their best-of-seven series.

Per Monday evening’s injury report, Paul was listed as “out” for Game 2 of the Western Finals. The veteran point guard remains sidelined after entering the NBA’s Health and Safety protocols last Wednesday due to a positive COVID-19 test.

According to a report, the 36-year-old is currently quarantining in Los Angeles and is not experiencing any COVID-19 symptoms. However, Paul needs to have at least two negative PCR test results at least 24 hours apart, in addition to undergoing a cardiac exam, before the Suns’ guard can be cleared to play in the playoffs once again.

Paul has been a vital cog in the Suns’ playoff success this season, leading them to their first Western Finals stint since 2010. He was exceptional in their last playoff series against the Denver Nuggets, averaging 25.5 points on a stunning 62.3 percent shooting from the field. He finished the series with 41 assists and just five turnovers and delivered a virtuoso performance in Game 4, scoring a season-high 37 points to give Phoenix the four-game sweep.

With Paul remaining sidelined, the Suns will again bank on Devin Booker to deliver the goods in Game 2. He starred for Phoenix in Game 1, notching his first career triple-double in the win against the Clippers, recording 40 points, 13 rebounds, and 11 assists in the 120-114 victory. He took over late as he scored or assisted on 43 of the Suns’ final 50 points.

Expected to take Paul’s place in the starting lineup for Game 2 is Cameron Payne. He stepped up big time in the absence of Paul in the series opener, scoring 11 points on 5-of-10 shooting and dishing out nine assists in 29 minutes of action.

On the other hand, the Clippers will battle the Suns in Game 2 without All-Star forward Kawhi Leonard. The former Finals MVP has not played since injuring his right knee during Game 4 of their Western Conference Semifinal series against the Utah Jazz. The nature of Leonard’s injury remains unclear, but he has been diagnosed with a right knee sprain.

According to Clippers coach Ty Lue, there’s still no change to Leonard’s status, which remains uncertain for the remainder of this series against the Suns.

Not helping matters for the Clips is the injury situation of Marcus Morris Sr. He also injured his knee in the series opener against the Suns and only played five minutes in the second half of their Game 1 loss.

With Leonard ruled out and Morris possibly sidelined, the Clippers will once again ask Paul George to do the heavy lifting in Game 2. He finished Game 1 against Phoenix with 34 points, five assists, four rebounds, and two steals. George has scored at least 31 points in four of the Clippers’ last five games, providing the firepower during Leonard’s absence.