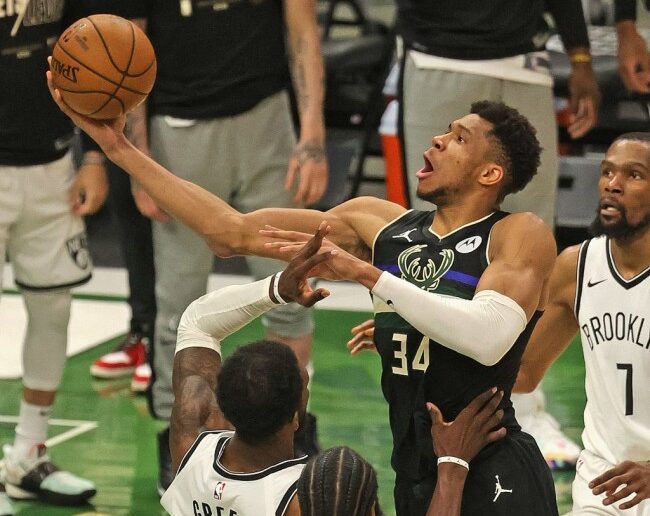 Milwaukee will live to fight another day. The Bucks forced a winner-take-all Game 7 after beating the Brooklyn Nets, 104-89, at Fiserv Forum on Thursday. Giannis Antetokounmpo and Khris Middleton led the way for the Bucks who continued the trend of the home team holding serve in this series.

With their tournament lives hanging in the balance, the Greek Freak came into Game 6 with an attacking mindset. He bullied his way into the paint, utilizing his size advantage against Brooklyn. 11 of Antetokounmpo’s 12 field goals Thursday came inside the paint, with 10 of those coming inside the restricted area, according to data collected by ESPN Stats & Information. Antetokounmpo’s average field goal distance of 5.6 feet was his lowest of this postseason.

That strategy worked wonders for Milwaukee as the Bucks led wire-to-wire in Game 6. Antetokounmpo, whose wayward jump shot has been criticized in this series, finished the game with 30 points, 17 rebounds and four assists in 41 minutes of action. He didn’t take a single three-point attempt as he made it a point to attack the Nets’ interior with gusto.

It wasn’t just Antetokounmpo, though, who delivered the goods for the Bucks in Game 6. Khris Middleton produced his best showing in this postseason, scoring a playoff career-high 38 points on 11-of-16 shooting from the field, while also recording 10 rebounds, five assists and five steals. The two-time All-Star was clutch, making timely baskets every time the Nets threatened in this contest.

After falling behind by double digits in the opening half, the Nets managed to slice the Bucks’ advantage to five with just two minutes remaining in the second quarter. Middleton answered with two of his five three-pointers before the halftime break, giving the Bucks an 11-point lead.

The Nets made major headway again with less than two minutes to go in the third quarter, cutting the Bucks’ lead down to five. Middleton once again responded, draining a pair of midrange jumpers and a buzzer-beating layup in transition to push Milwaukee’s lead back up to 11.

Brooklyn threatened one final time in the fourth quarter, cutting Milwaukee’s lead to five points. Middleton again was the one who stopped the Nets’ rally, draining three free throws that ignited the 14-0 run that all but sealed the win for Milwaukee.

Coach Mike Budenholzer’s decision to further shorten his rotation in Game 6 paid dividends as his starters not only contributed heavy minutes but also took the bulk of the scoring load. Jrue Holiday had a Game 6 to remember, recording 21 points, eight rebounds, five assists and four steals. The trio of Antetokounmpo, Middleton and Holiday combined for 89 points on Thursday and they will need more of the same this coming Saturday if they are to pull off the victory in Game 7.

It’s back to the drawing board for the Nets who looked fatigued in Game 6. Even though Kevin Durant scored a team-high 32 points on Thursday, he needed 30 shots to bag that total, a far cry from his 49-point performance in Game 5 where he shot 16 of 23 from the field.

James Harden scored 16 points but still looked far from 100 percent in Game 6. He scored just two points in the second half of Game 6, with the former MVP not making a single field goal during that period.