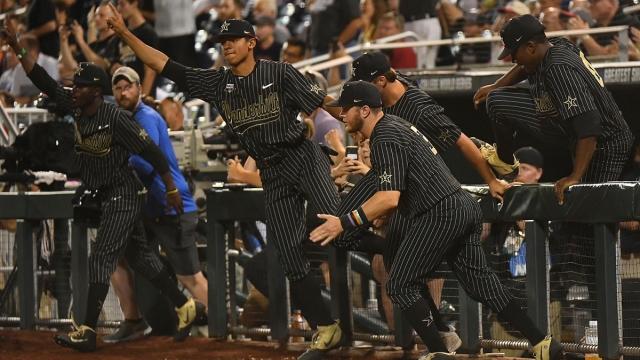 The field of 64 teams that will compete for the 2021 NCAA college baseball championship will be announced on ESPN2 at noon ET on Monday, May 31. You can stream it on WatchESPN.

The 64 teams will be placed in 16 different four-team regions, with teams seeded one through four to compete in a double-elimination format.

Games then start with regionals and continue on to super regionals before the men’s College World Series begins Saturday, June 19, at TD Ameritrade Park in Omaha.

We’re covering the selections and the tournament live here.  You can see the interactive bracket here and get a printable CWS bracket here.

Here is more on how the tournament works:

What is the difference between the Division I baseball tournament and the College World Series?

The NCAA Division I baseball tournament is a 64-team tournament that starts in May. After two rounds of play (which each consist of multiple games), there are just eight teams left. These eight teams then head to Omaha, Nebraska for the College World Series. The CWS is the culmination of the DI tournament, where the teams compete in two brackets, with the winners of each meeting in the CWS finals, a best-of-three series to decide the NCAA champion.

When did the College World Series start?

The first-ever NCAA Division I baseball tournament was in 1947, and would barely be recognized as the same tournament nowadays. The 1947 tournament featured just eight teams, which were divided into two four-team, single-elimination brackets. The two winners — California and Yale — then met in a best-of-three final in Kalamazoo, Michigan. California would go undefeated through the inaugural CWS and beat Yale to capture the first title.

How are teams selected for the NCAA Division I baseball tournament?