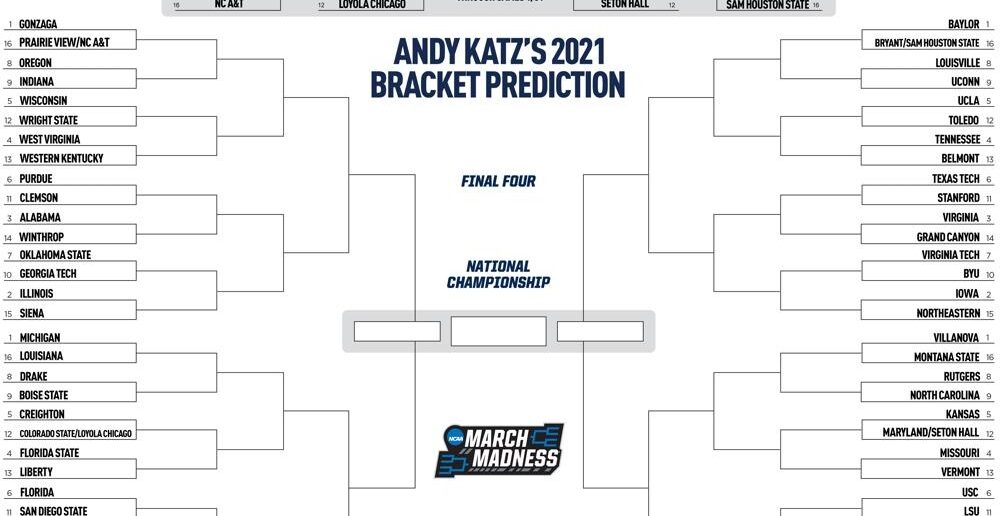 Gonzaga, Baylor, Villanova and Michigan are the No. 1 seeds in Andy Katz’s latest March Madness bracket predictions for the 2021 NCAA tournament.

All of his predictions here are based on games through Jan. 31. Katz will make bracket projections every week between now and Selection Sunday, which is March 14. He got 67 of the 68 teams correct in his final prediction before Selection Sunday in 2019.

Here is where Katz projects this year’s tournament field almost halfway into the regular season and about a month and a half from Selection Sunday. (Tap or click here to to open the bracket in a new window.)

And here’s that same bracket in table form.

Michigan joins Gonzaga, Baylor and Villanova as a No. 1 seed

There was one change on the No. 1 seed line from Katz’s last bracket projection, which was made Jan. 4. Michigan replaced Texas as a projected No. 1 seed, to join Gonzaga, Baylor and Villanova on the top seed line.

Since Katz’s last bracket projection, Michigan has gone 4-1 to improve to 13-1 on the season and 8-1 in the Big Ten. The Wolverines are in first place in the conference, through Jan. 31, with a 1.5-game lead over second-place Illinois.

Thanks to an elite balance, with the No. 5 adjusted defensive efficiency in the country and the No. 8 offensive efficiency, per kenpom.com, Michigan has established itself as arguably the best team in the loaded Big Ten and a serious candidate for one of the top seeds in the NCAA tournament.

Meanwhile, Gonzaga and Baylor have both maintained their undefeated records, a combined 33-0. Villanova came back from pause to win its last three games, with its only loss this season coming against Virginia Tech on a neutral court in November.

In addition to a No. 1 seed, the Big Ten has lots of everything else

If those teams make the NCAA tournament and receive those exact seeds, and if the better-ranked team then won in each first-round matchup, there’s a chance eight Big Ten teams could still be alive in the NCAA tournament in the second round. That’s because the conference has quality teams, and a high quantity of them.

If some or all of those projections hold, here are some notable milestones that could be achieved and potential tournament droughts that could end:

Duke and North Carolina combined to win three national championships last decade and the Tar Heels were the national runners-up in 2016, so the two Tobacco Road rivals combined to appear in 40 percent of the championship games from 2010 through 2019.

In Katz’s latest predicted bracket for 2021, North Carolina is a No. 9 seed and Duke is a No. 10 seed. That pick was made before Duke lost to Miami on Monday night so it’s likely to be different in the next bracket.

A breakdown of the bubble

It’s still early in conference play, obviously, but here’s a look at the teams that just made the cut for Katz’s tournament projections.

Maryland and Seton Hall are projected to play in one First Four matchup, with Colorado State and Loyola Chicago in another.