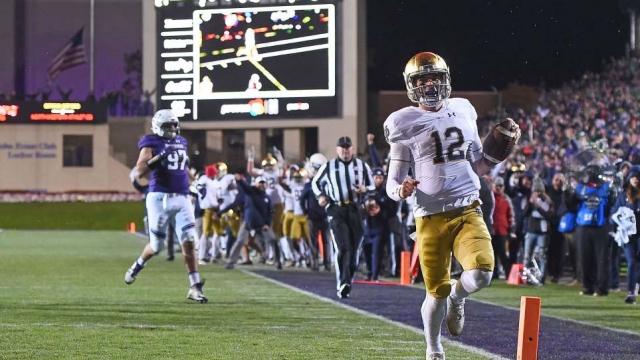 
Notre Dame football is part of a conference. Part of the Fighting Irish identity is their history as an FBS Independent. But for at least the 2020 college football season, the Irish will be a member of the ACC. A year ago, Notre Dame went 5-0 against the conference it’ll call home this season. If it can keep up that success against the league, the Fighting Irish could return to the College Football Playoff for a second time in three years.

Here is the complete 2020 Notre Dame football schedule, including opponents, results and players to watch.

Here is the full, detailed schedule for Notre Dame’s 2020 football season, with broadcast information and results.

Here’s what happened in every game of Notre Dame’s 2019 schedule:

Quarterback Ian Book broke out in 2019 as the full-time starter at Notre Dame. He helped the Fighting Irish reach the College Football Playoff two years ago on a team that was driven by defense. With the spotlight on Book, he threw for 3,034 yards and 34 touchdowns to six interceptions. The jump Book takes from last year to the current season could determine how far Notre Dame goes. For what it’s worth, he’s 11-1 against ACC teams with the only loss to Clemson in a 2019 CFP semifinal.

Book’s biggest adjustment in 2020 might be establishing a top target. The Fighting Irish lost its top three receivers from a year ago as Chase Claypool and Cole Kmet were NFL Draft picks and Chris Finke graduated. Junior tight end Tommy Tremble could be the next breakout pass-catcher in South Bend. Kmet caught only 15 passes two years before hauling in 43 for 515 yards and six touchdowns. Tremble had 14 catches and four touchdowns last year. Don’t be too surprised if Tremble takes a similar step forward.

You can’t talk Notre Dame football without talking about the defense. The Fighting Irish allowed the third fewest passing yards per game last season. If they’re going to continue to dominate opposing quarterbacks, look to sophomore safety Kyle Hamilton to lead the charge. Hamilton led the Irish with four interceptions as a freshman, bringing one back for a touchdown. He also made 41 tackles and broke up six additional passes.

We have Notre Dame at No. 11 in our preseason Top 25. Here’s the breakdown:

After a blowout loss to rival Michigan, the Irish quietly won out to go 11-2 one season after making the College Football Playoff. With QB Ian Book’s return, Notre Dame should be potent on offense. And the defense should be strong, though the secondary is the biggest question mark there. But there’s a new twist this year: Notre Dame will be eligible for the 2020 ACC title game.

The College Football Playoff era is entering its seventh season in the 2020-21 season. LSU won the national championship in its inaugural appearance. Notre Dame has been selected once — 2019— through the first six years of the CFP. Could the Fighting Irish’s 2020 football affiliation with the ACC help them become one of the top four teams?