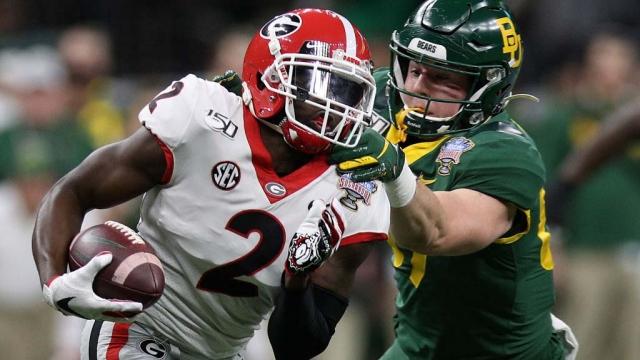 
Georgia football enters Year 5 of the Kirby Smart era looking for a return to the top of the SEC after back-to-back-to-back appearances in the SEC Championship Game. UGA completed its 2019 season with a Sugar Bowl win over Baylor to finish 12-2. It was the Bulldogs’ second straight Sugar Bowl appearance, holding off the Bears this time around after coming up short against Texas a year earlier.

Here is the complete 2020 Georgia football schedule, including opponents, results and players to watch.

Here is the full, detailed schedule for Georgia’s 2020 football season, with results.

The Bulldogs went 12-2 last year, losing to LSU in the SEC Championship Game before defeating Baylor in the Sugar Bowl.

Here’s what happened in every game of Georgia’s 2019 schedule:

Three-year starting quarterback Jake Fromm is gone, as is his dynamic backfield teammate D’Andre Swift. Replacing both, in addition to three offensive lineman, is not an easy task. Wake Forest transfer Jamie Newman will likely start the season under center in Athens after throwing for over 2,800 yards and 26 touchdowns a year ago. The graduate transfer could take on a lot of offensive responsibility with not much time to get comfortable in Georgia’s system. Fortunately for Newman, wide receiver George Pickens is back after leading the Bulldogs with 727 yards and eight touchdowns as a freshman.

But once again, defense is the name of the game in Athens. Kirby Smart has eight players back who started at least eight games in 2019. Inside linebacker Monty Rice has 38 career appearances at Georgia and will start the year on the preseason watch list for the Butkus Award — given to the top linebacker in college football. Rice led UGA with 89 tackles last season in addition to three TFL and three pass breakups, earning him Second Team All-SEC honors a year ago.

Experience is a theme with Georgia’s defense, and no Bulldog has more of it on that side of the ball than safety Richard LeCounte as the senior has started all but one game over the past two seasons. LeCounte finished his junior campaign with 61 tackles and led the Bulldogs in interceptions (4), fumble recoveries (3) and share of the team lead with a pair of forced fumbles. Check most defensive preseason watch lists and you’ll find LeCounte’s name. He made the initial cut for the Bednarik, Thorpe and Nagurski Awards.

Georgia sits at No. 5 in our preseason Top 25. Here’s the breakdown:

UGA loses a bunch of stars, from QB Jake Fromm and RB D’Andre Swift to its experienced offensive linemen. But when it comes to talent, Georgia will again be up there among Clemson, Alabama and Ohio State. The Bulldogs got a boost with Wake Forest transfer QB Jamie Newman picking UGA. The Dawgs will also again have one of the top defenses in the country.

The College Football Playoff era is entering its seventh season in the 2020-21 season. LSU won a national championship in its inaugural appearance while Alabama was not among the four teams selected for the first time in CFP history. Could this be the beginning of a new era in the SEC?

Whether it’s LSU, Alabama or another SEC representative among the top four teams, here are the dates and sites for the 2020 College Football Playoff semifinals and CFP national championship.