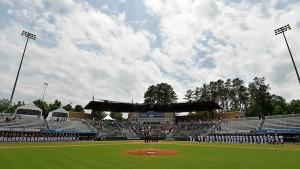 2020 DII baseball preview: 8 teams that could earn a spot in Cary


The first pitch of the 2020 DII baseball season is Friday, Jan. 31, and that’s when more than 250 teams begin the hunt for a national championship. Let’s take a stab at narrowing that field to eight and predicting those teams that survive the road to Cary.

PRESEASON RANKINGS: Take a look at the first-ever NCAA.com top 25

The eight schools that make it through Super Regionals will converge on the USA Baseball National Training Complex on the week of May 30-June 6. Last year, Tampa won its eighth DII baseball national championship in a field that a mere two teams — Mercyhurst and UC San Diego — made return trips from the year before.

There are a slew of schools that are tournament regulars and look Super-Regional ready, but which eight seem poised to find themselves back in Cary in 2020? Let’s take a region-by-region look.

The 2020 DII baseball championship: 8 for Cary

The case for Millersville winning the Atlantic: The Atlantic Region is PSAC country. Last year, five of the six teams in the Atlantic Region bracket hailed from the conference, and you can expect more of the same in 2020. There is some rebuilding going on for Millersville, Mercyhurst and West Chester this year which could allow a team like Seton Hill, East Stroudsburg or Charleston (WV) to sneak in and surprise, but I think Cole Friese and company should keep the offense afloat for the Marauders while Drew Miller and a new-look rotation get comfortable.

The case for Central Missouri winning the Central: That would mark the second-straight trip for Central Missouri should they survive the Central Super Regional and advance. Last year, the Mules were a semifinalist and with Erik Webb back to cause damage in the lineup and Mason Green leading the rotation, there is plenty for a deep DII baseball tournament run. Minnesota State is the biggest threat here, but Augustana (SD) and Arkansas-Monticello are ready to cause havoc in the Central as well.

The case for New York Tech winning the East: I say it every year. The only thing predictable about the East Region is that it is completely unpredictable. No team has made back-to-back trips to the finals since Franklin Pierce in 2007-08, but I think the Bears change that this year. DJ Masuck, Joseph Murphy, and Chris Mott return after combining for 36 starts in the Bears run to Cary as does player-of-the-year candidate EJ Cumbo. Expect another run-in with Southern New Hampshire, but the Bears have a great shot at repeating in the East.

The case for Bellarmine winning the Midwest: The Knights are looking to make program history. Eight times they have made the NCAA DII tournament and have yet to advance to the DII baseball championship finals. This could be the year they break through, although it won’t be easy. This is one of my favorite regions to watch in 2020 with a lot of sleeper candidates like Quincy, Southern Indiana and Illinois-Springfield ready to pounce and Ashland returning a ton of starters that got them to Cary, but this is Bellarmine’s best chance to escape the Midwest. The Knights return six bats and the starting rotation after making the regionals three-straight years for the first time in program history.

The case for Delta State winning the South: This is always the toughest region for me to pick. Six of the last 10 DII baseball championship final series has had a team from this region with Tampa, West Florida and Nova Southeastern all winning at least one title over that decade. Do you go with the defending champ Spartans who owned the South in the 2010s, going to five DII baseball championship finals? Do you go with the all-time winningest team in DII baseball championship history and pick the Florida Southern Mocs? We know West Florida and Nova Southeastern will find themselves into the mix, and schools like Eckerd are sneakily waiting on the outside. Based on history, Tampa is very successful in making back-to-back trips to the finals, but this team has a new look to it. I’m giving the ever-so-slight edge to the Statesmen because ace Hunter Riggins returns atop the rotation.

HISTORY: Schools with the most DII baseball championships

The case for Angelo State winning the South Central: This is another close region and could very well come down to a 2019 Super Regional rematch between Colorado Mesa and Angelo State. The two aren’t simply the two best teams in the South Central, but all of DII baseball, both in the top six of my preseason rankings. Angelo State returns the best player in DII baseball from a year ago in Josh Elvir at the plate and Trent Baker is back in the rotation with high aspirations. I think Colorado School of Mines is a sneaky-good team to watch this year as well, so don’t be surprised to see them in the mix.

The case for North Greenville winning the Southeast: The Crusaders were close last year, and when you look at the power and contact-ability that returns in their lineup for 2020, it seems like it’s an easy choice. While I think North Greenville is a serious title contender, it won’t be an easy run by any means. Catawba and Mount Olive will find themselves back in the mix, and it will be interesting to see what Newberry can do. North Georgia has two of the better arms in DII in the rotation and bullpen and will be a nightmare if they get a lead. North Greenville has the edge now, but there is little room for error.

The case for UC San Diego winning the West: This is Tritons country. There will be a lot of familiar faces not returning that helped head coach Eric Newman lead UC San Diego to each of the last three DII baseball championship finals, but he has some really nice pieces back that makes a fourth-straight trip possible. Azusa Pacific, Cal Poly Pomona, and Point Loma — and even Cal State Monterey Bay — are all legitimate threats, but this is UC San Diego’s region to lose until someone proves they can take it from them.