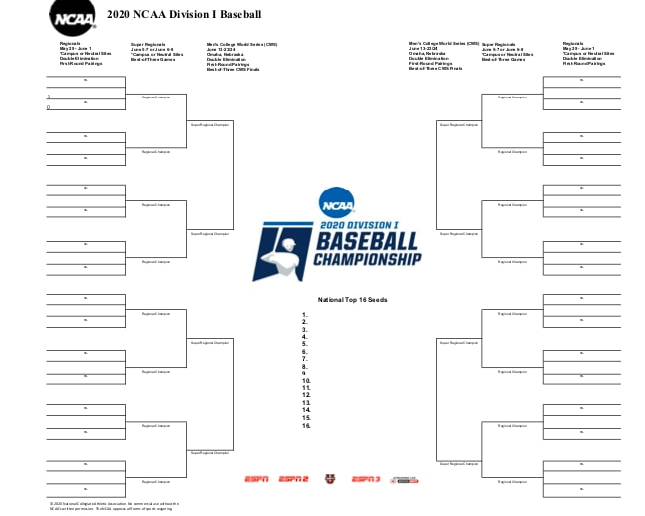 Every team opens with the same aspirations: to reach TD Ameritrade Park in Omaha, Nebraska, for a shot to win the College World Series. Only eight teams get to college baseball’s mecca, which opens play on June 13, 2020.

Before first pitch in Omaha, 64 teams enter regional play, beginning on May 29, 2020. Here is what that bracket looks like. You can click or tap here for an expanded version.

After regional play, sixteen teams battle in the Super Regionals. The teams that advance will head to Omaha. This is your first look at the 2020 College World Series bracket. You can tap or click here to expand the bracket. 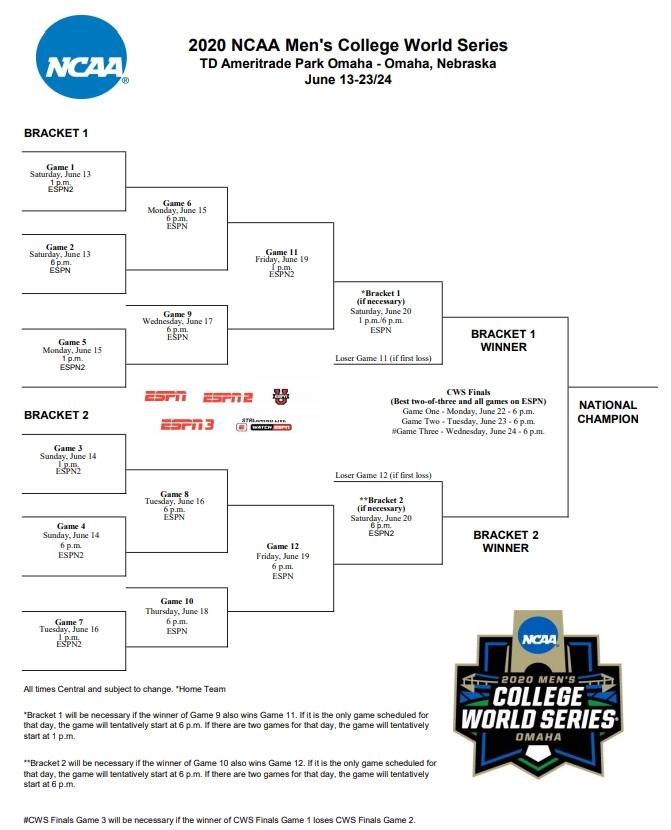 The NCAA Division I baseball tournament is a 64-team tournament that begins play on May 29 this season. The 64 teams are broken down into 16 regions — four teams apiece — and battle in a double-elimination tournament. The winners of that first round of play advance to the Super Regionals and are paired up in eight, best-of-three series for the chance to head to the College World Series.

The final eight teams head to Omaha. The teams are seeded and split into two four-team brackets. A double-elimination tournament begins and the teams that survive each mini-bracket advance to the best-of-three College World Series finals.

For a detailed look at the entire tournament — including changes over the years, a look at each round, and a complete history — check out our essential guide on how the tournament works by clicking or tapping the link below:

How the College World Series Works: Everything you need to know for Omaha

California won the very first College World Series way back in 1947. That CWS was played in Kalamazoo, Michigan, and a mere three years later, the event would move to Johnny Rosenblatt Stadium and Omaha has been the home to the CWS ever since. After the 2010 season, the College World Series moved into TD Ameritrade Park where it has been played the past nine seasons.

CWS HISTORY: Programs with the most CWS titles | Most CWS appearances | Winningest coaches

Vanderbilt is the most recent national champion. The Commodores won in three games after falling behind 1-0 to an exciting Michigan team that surprised plenty of people in 2019.

Here is the complete history of the College World Series championship game.