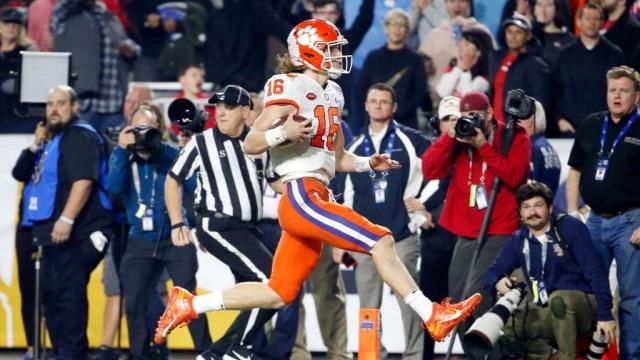 Here is the complete 2020 Clemson football schedule, including opponents, results and players to watch.

Here is the full, detailed schedule for Clemson’s 2020 football season, with broadcast information and results.

Here’s what happened in every game of Clemson’s 2019 schedule:

Clemson finished last season top 5 in scoring defense and scoring offense. In many cases that’s a championship formula, but the Tigers  were unable to keep up with LSU in the national championship game. Replacing six defensive starters won’t be easy, though points shouldn’t be too hard to come by in Death Valley with quarterback Trevor Lawrence and running back Travis Etienne both returning.

Lawrence grabbed hold the reigns under center four games into his freshman year and never looked back, leading Clemson to 25 wins and two College Football Playoff appearances — including a national championship victory — in two seasons. It’s also worth noting that Lawrence has never lost to an ACC team. That’s notable in a year when the Tigers’ regular season is exclusively made up of conference opponents. As a sophomore, he threw for 3,665 yards and scored 45 total touchdowns while doubling his interceptions from four to eight. Lawrence’s biggest adjustment of 2020 might be the absence of his top two receiving targets — Justyn Ross (injury) and Tee Higgins (NFL) — from a year ago.

Sharing the backfield with Lawrence is Etienne, whose return to Clemson may have come as a surprise to some after posting back-to-back 1,600-yard campaigns in his sophomore and junior seasons. But Etienne isn’t just a hard runner or a tough tackle to make, he’s also a scoring machine who has found the end zone 62 times through three seasons. Like Lawrence, the Tigers’ senior tailback garnered numerous preseason accolades between the AP preseason All-America teams to being named to the Maxwell and Doak Walker Award watch lists.

With Lawrence and Etienne commanding the offense, linebacker James Skalski could potentially become the backbone of coordinator Brent Venables’ defense. Skalski lined up for 699 snaps a year ago, the third-most on Clemson’s defense behind Isaiah Simmons and AJ Terrell — both 2020 first round NFL Draft picks. The graduate transfer registered 105 tackles, 7.5 for loss in addition to 4.5 sacks and  four pass breakups. With Simmons, Tanner Muse and Chad Smith all gone, Skalski could be poised for a bigger role. His 2019 numbers earned him spots on preseason watch lists for the Bednarik, Nagurksi and Butkus Awards.

We have Clemson at No. 1 in our preseason Top 25. Here’s the breakdown:

This was set regardless of what happened in New Orleans. QB Trevor Lawrence could be the clear Heisman favorite going into 2020, plus he’ll get to throw to Justyn Ross. And in big news, RB Travis Etienne, the Tigers’ all-time leading rusher, said he’s coming back for 2020. There will also be turnover on the offensive line and with losing key defensive standouts, but DC Brent Venables will keep this a powerful unit. The incredible recruiting class will help.

The College Football Playoff era is entering its seventh season in the 2020-21 season. LSU won a national championship in its inaugural appearance while Clemson extended its streak of consecutive appearances to five years. History is also on Clemson’s side coming into the new season. The Tigers are 6-3 in CFP games, having won national championships the year after each of its first two CFP losses.