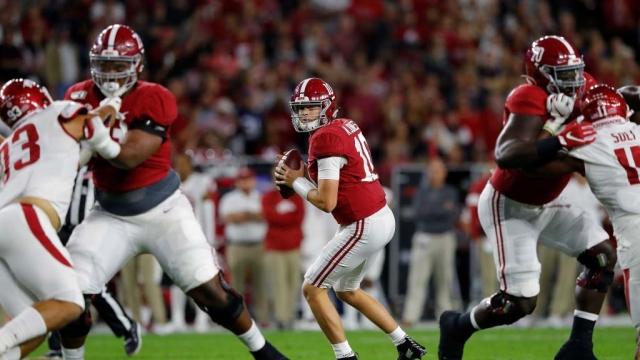 Alabama football enters the 2020 college football season in rare territory. The Crimson Tide finished 11-2 last season, the program’s ninth consecutive year it won 11 or more games — a record in the AP poll era. But for the first time in College Football Playoff history, coach Nick Saban’s team was not among the top four teams after playing in the past four national championship games.

Here is the complete 2020 Alabama football schedule, including opponents, results and players to watch.

Here is the full, detailed schedule for Alabama’s 2020 football season, with results.

The Crimson Tide went 11-2 last year, beating Michigan in the Citrus Bowl after missing out on the College Football Playoff for the first time in its six-year existence.

Here’s what happened in every game of Alabama’s 2019 schedule:

Alabama lost four key players to the first round of the 2020 NFL Draft. Quarterback Tua Tagovailoa went No. 5 to the Dolphins, offensive tackle Jedrick Wills went No. 10 to the Browns while wide receivers Henry Ruggs III and Jerry Jeudy went Nos. 12 and 14 to the Raiders and Broncos.

But there’s no need for the Crimson Tide, who finished second in scoring offense last year, to hit the reset button. Quarterback Mac Jones started four games in 2019 and threw for 14 touchdowns against just three interceptions. Jones is the veteran among Alabama’s signal-callers but might have to fend off freshman Bryce Young to retain the starting job. Regardless of who is under center, there won’t be a need to adjust as much as one might think.

Leading rusher Najee Harris could be the biggest name in the backfield after running for 1,224 yards and scoring 20 total touchdowns last year, 13 of which came on the ground. While Ruggs and Jeudy are gone, leading receiver Devonta Smith passed on the NFL and could be one of the top wideouts in all of college football after amassing 1,256 yards and 14 touchdowns on 68 receptions as a junior. Though Smith will likely take over as the No. 1 receiver, Jaylen Waddle could be poised for the bigger jump. Waddle’s numbers dropped in 2019 given Alabama’s depth at the position. With more targets available, it wouldn’t be a surprise to see the junior bounce back in a big way.

On the other side of the ball, defensive back Patrick Surtain II is one of a few experienced players returning in the secondary. He came into his own as a sophomore, recording two interceptions, eight pass breakups and three forced fumbles. With Trevon Diggs and Xavier McKinney off to the NFL, Surtain could have a lot more responsibility this year.

We have Alabama sitting at No. 3 in our preseason Top 25. Here’s that breakdown:

Tua Tagovailoa is gone, but the offense should still be among the nation’s best — no matter which player lines up at QB. Mac Jones passed for 327 yards and three touchdowns in the bowl win vs. Michigan, plus there’s 5-star QB Bryce Young. On defense, linebacker Dylan Moses returns after missing last season with a torn ACL.

The College Football Playoff era is entering its seventh season in the 2020-21 season. LSU won a national championship in its first appearance while Alabama was not among the top four teams for the first time in CFP history. Will LSU maintain its grip on the SEC? Can the Tide return to the pinnacle of college football? Or maybe 2020 is the year a new contender reveals itself.