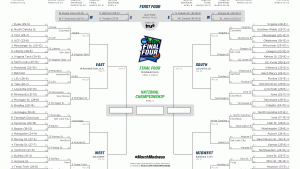 
The 2019 NCAA tournament will continue on Thursday, March 28 with the Sweet 16. The official March Madness bracket, scores and schedule are below.

Click or tap right here to open up a printable version of the March Madness bracket pictured below in a new tab or window. You can print the bracket in landscape or horizontal mode. Here is a .JPG of the 2019 NCAA bracket if you’d like a copy in that format:

Here is the complete list of teams in the tournament. They are listed in alphabetical order:

Who won the first March Madness?

The inaugural tournament had just eight teams, and saw Oregon beat Ohio State 46-33 for the title in 1939:.

Who has won every NCAA tournament?

Here is the list of every men’s basketball national championship since the NCAA tournament first started in 1939:

*Louisville’s participation in the 2013 tournament was later vacated by the Committee on Infractions.

What were the most memorable championship games in March Madness history?

Some recent classics include the 1989 title game, when No. 3 Michigan defeated No. 3 Seton Hall, 70-69 in overtime and the 2016 national title game when Villanova beat North Carolina, 77-74, on a shot at the buzzer by Kris Jenkins.

You can read more about classic NCAA games here and watch them all on NCAA on Demand on YouTube.

How are March Madness teams selected?

The second avenue for an invitation is an at-large bid. The selection committee (more on them in a second) convenes on Selection Sunday, after all regular season and conference tournament games are played, and decides which 36 teams that are not automatic qualifiers have the pedigree to earn an invitation to the tournament.

Who is on the March Madness Selection Committee?

School and conference administrators are nominated by their conference. Those who are selected serve five-year terms and represent a cross-section of the Division I membership.

Currently, the chair of the committee is Bernard Muir, the director of athletics at Stanford.

Here are the rest of the committee members:

What is the importance of seeding?

The NCAA men’s basketball tournament is made up of 68 teams. On Selection Sunday, before any tournament game is played, those teams are ranked 1 through 68 by the Selection Committee, with the best team in college basketball — based on regular season and conference tournament performance — sitting at No. 1. Four of those teams are eliminated in the opening round of the tournament (known as the First Four), leaving us with a field of 64 for the first round.

Those 64 teams are split into four regions of 16 teams each, with each team being ranked 1 through 16. That ranking is the team’s seed.

In order to reward better teams, first-round matchups are determined by pitting the top team in the region against the bottom team (No. 1 vs. No. 16). Then the next highest vs. the next lowest (No. 2 vs. No. 15), and so on. In theory, this means that the 1 seeds have the easiest opening matchup in the bracket.