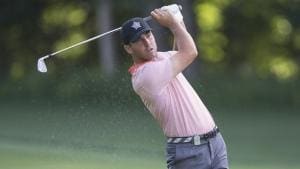 
Strong all season, the Oklahoma State men’s golf team is storming through the postseason again.

The top-ranked Cowboys shot 11-under on the final nine to win the Louisville Regional by four shots and will head to Fayetteville, Ark. as the national championship favorite.

Oklahoma State won the national title on its home course last season, defeating Alabama in the finals at Karsten Creek. Led by U.S. Amateur champion Viktor Hovland and the Cowboys have won six tournaments this season, taking the Big 12 title in their previous start.

The Cowboys, chasing the program’s 12th national championship, are one of 30 teams (along with six individuals) in the 156-man field, May 24-29 at The Blessings Golf Club, the University of Arkansas’ home course. The Razorbacks missed the Austin Regional cut by three shots but freshman Julian Perico qualified as an individual.

No. 6 Texas crushed the field in Austin, rolling to a 20-shot victory on its home course. No. 12 Stanford and No. 16 Georgia also earned regional victories at home. No. 20 Texas A&M won in Pullman, Wash. and No. 23 Illinois, a perennial contender under coach Mike Small, snagged the title in Myrtle Beach, S.C.

Georgia Southern (No. 58) is the lowest ranked team to advance to the finals, returning for the first time since 2010. LSU nipped SEC rival Ole Miss by one shot to secure fifth place in the Stanford Regional. South Carolina shot 13-under in the final round at Pullman, then defeated Colorado State in a playoff for the final spot.

Finals play consists of three days of stroke play on Friday, May 24 through Sunday, May 26 (54 holes), after which the top 15 teams and nine individuals not on an advancing team will be determined. That is followed by a final day of 18 holes of stroke play on Monday, May 27 to determine the top eight teams that will advance to match play as well as the 72-hole individual champion.

You were there to help us achieve #exce11ence at @KarstenCreek. Now, let’s show them how Championship Orange travels. See you in Fayetteville! #okstate #golfschool pic.twitter.com/CVHOPi3dZS

The team national champion will be determined by a match-play format – quarterfinals and semifinals conducted on Tuesday, May 28, followed by finals on Wednesday, May 29.

Golf Channel is providing 15 hours of live TV coverage. Also, return to NCAA.com for daily recaps and live updates throughout the tournament.

Oklahoma State – Talented, confident, experienced and on form, the Cowboys have the best combo in the nation in national player of the year candidates Matthew Wolff (No. 1 in Golfstat rankings) and Hovland (No. 3).

Arizona State – After a sluggish first round, the No. 2 Sun Devils fired 14-under over the final 36 holes in the Stanford Regional, finishing 2nd to the hosts. They’ve placed worse than second only twice in 12 starts and have a 158-13-2 head-to-head record in 2018-19.

📸 Images from our third round in Myrtle Beach as we advance to the #NCAAGolf Championships pic.twitter.com/1y3evprNdw

Oklahoma – The Sooners took three trophies this season and enter the national title on a odd roll of five consecutive third-place finishes. They also have seniors Blaine Hale and Brad Dalke who started on OU’s 2017 national championship squad.

Texas – It’s unwise to omit the No. 6 Longhorns following a dominant effort and because they have freshman Cole Hammer, No. 10 in the nation. He and teammate Steven Chervony shared medalist honors in Austin with TCU’s Stefano Mazzoli.

Matthew Wolff, Oklahoma State – He has an unorthodox swing, unbelievable power and the uncanny ability to put his golf ball into the hole very quickly (68.58 stroke average). Wolff, No. 4 in the World Amateur rankings, won five times this season and fired a 4-under 32 on the back nine to help the Cowboys win the Louisville Regional.

Justin Suh, USC – The senior is No. 2 in the World Amateur rankings. He’s won seven times in the last two years, shattering many records set at USC by PGA Tour member Jamie Lovemark.

Collin Morikawa, California – No. 3 amateur in the world, the Golden Bears’ senior has a 69.72 career stroke average and a pair of victories this season, including the Pac-12 championship.

REGIONAL RESULTS: Everything you need to know from the 2019 NCAA Regional golf men’s tournaments

Viktor Hovland, Oklahoma State – This season, Hovland has three victories, a 68.59 stroke average and the silver cup given to the low amateur at the Masters. He’s also No. 1 in the World Amateur rankings and has an exemption into the U.S. Open awaiting after the Cowboys complete their business in Fayetteville.

Chun An Yu, Arizona State – Closed with rounds of 65 and 67 in the Stanford Regional to tie for second. Enters national finals with eight top-5 finishes, recorded 15 sub-70 rounds on the season.