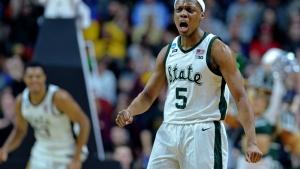 
Four of men’s college basketball’s elite programs are ready to tip off the 2019 season when Duke, Kansas, Kentucky and Michigan State play on November 5. Check out the schedule, times and TV information below.

This year’s Classic will be played at Madison Square Garden in New York City.

This year’s games feature teams that have hopes of going on deep March Madness runs. Last year, Michigan State advanced to the Final Four by beating overall No. 1 seed Duke in the Elite Eight. Kentucky reached the final eight, but the Wildcats fell to Auburn. Kansas bowed out in the Second Round to eventual Final Four-bound Auburn.

Andy Katz expects big things from these four. In his latest 2020 NCAA tournament bracket predictions, Katz has Michigan State, Kansas and Kentucky as No. 1 seeds. He has the Blue Devils as a No. 3 in Kentucky’s region.

It’s likely the 2019 event will continue a trend of seeing a ranked vs. ranked games. There have been 32 teams (16 games) through the years — and 31 have been ranked. The 2011 Michigan State team is the only one to not be ranked at the time of the Champions Classic. In fact, there have been more No. 1 vs. No. 2 games (two) than unranked teams (one) in Champions Classic history.

Not only that, but there have been five No. 1 teams in the history.

The 2019 Champions Classic marks the ninth edition of the event, as it started in 2011. It’s also the third time the Classic will be at Madison Square Garden — the arena hosted the inaugural games in 2011 and again in 2016.

Here’s a rundown of the event history, including AP Poll rankings at the time of the games:

2019-20 PREVIEW: The 21 most entertaining players for next season

Through eight years, there isn’t much gap between the four teams by record. Duke tops the field at 5-3, with Kansas and Kentucky both 4-4. Michigan State is 3-5. But Kansas has the longest winning streak, as the Jayhawks have won three in a row.

Two teams are undefeated against a foe. Duke is 3-0 against Michigan State, most recently beating the Spartans in 2017. Kansas is 2-0 against Duke — and the two face off this season.