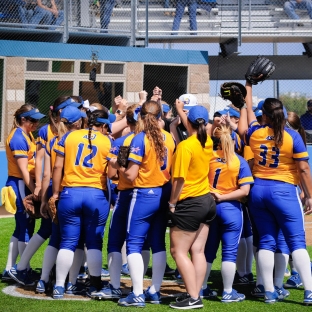 The 2017 Division II Softball Championship Tournament begins on Friday, and teams will compete in Salem, Va. to see who will be crowned as the national champion.

How they arrived: The Rambelles went 3-0 in the South Central Regional and then beat Texas Women’s University twice in the Super Regional, outscoring the Pioneers 11-2 in the two wins.

Notes: This marks the fifth time in the program’s history that Rambelles have reached the Division II Softball Championship. The last time was 2010. Angelo State beat Armstrong 4-1 when the two teams met Feb. 4 in Melbourne, Fla. The Rambelles have won 22 of their last 23 games. Their strong finish in the regular season helped the Rambelles earn the No. 1 seed.

Pitcher: Minnesota State-Mankato senior pitcher Coley Ries is a top three finalists for Schutt Sports/NFCA Player of the Year. Ries is the school’s all-time leader in wins with 114. This season she is 36-3 with a 1.02 ERA and 426 strikeouts in 259.2 innings.

Catcher: Southern Indiana senior Haley Hodges. Hodges is the second player in the program’s history to have back-to-back seasons of 10 or more home runs and the first players to have two seasons of 50 or more RBI.

First base: Southern Indiana junior Marleah Fossett. Fossett is hitting over .400 with 14 doubles and five home runs. Fossett knows how to get on base in more ways than one. She set a school record by getting on base 20 times on hit by pitches.

Second base: Humboldt State senior second baseman Tiffany Hollingsworth is hitting .343 with eight home runs and a team-leading 49 RBI. She has only struck out eight times in 181 at bats.

Shortstop: Molloy junior Brianna Dalton. She made second-team All-East Coast Conference. She is hitting .273. She has committed only six errors.

Third base: Armstrong State junior third baseman Katie Collins leads the Pirates in hitting with a .368 batting average. She has socked 13 home runs.

Outfield: Angelo State freshman outfielder Courtney Barnhill is the type of newcomer that helps a team get to the next level. She is hitting .381 with 14 home runs, 11 doubles with 53 RBI.

Outfield: Minnesota State-Mankato sophomore McKenzie Paap leads off and sets the table for the Mavericks. She is hitting .424 with 16 doubles and 40 stolen bases in 44 attempts.

Designated player: Angelo State senior Kenedy Urbany has excelled on the mound and in the batter’s box. Urbany, a first-team D2CCA first-team South Central All-Region selection, is 21-1 with a 1.17 ERA. She is also hitting .325 with 14 home runs.